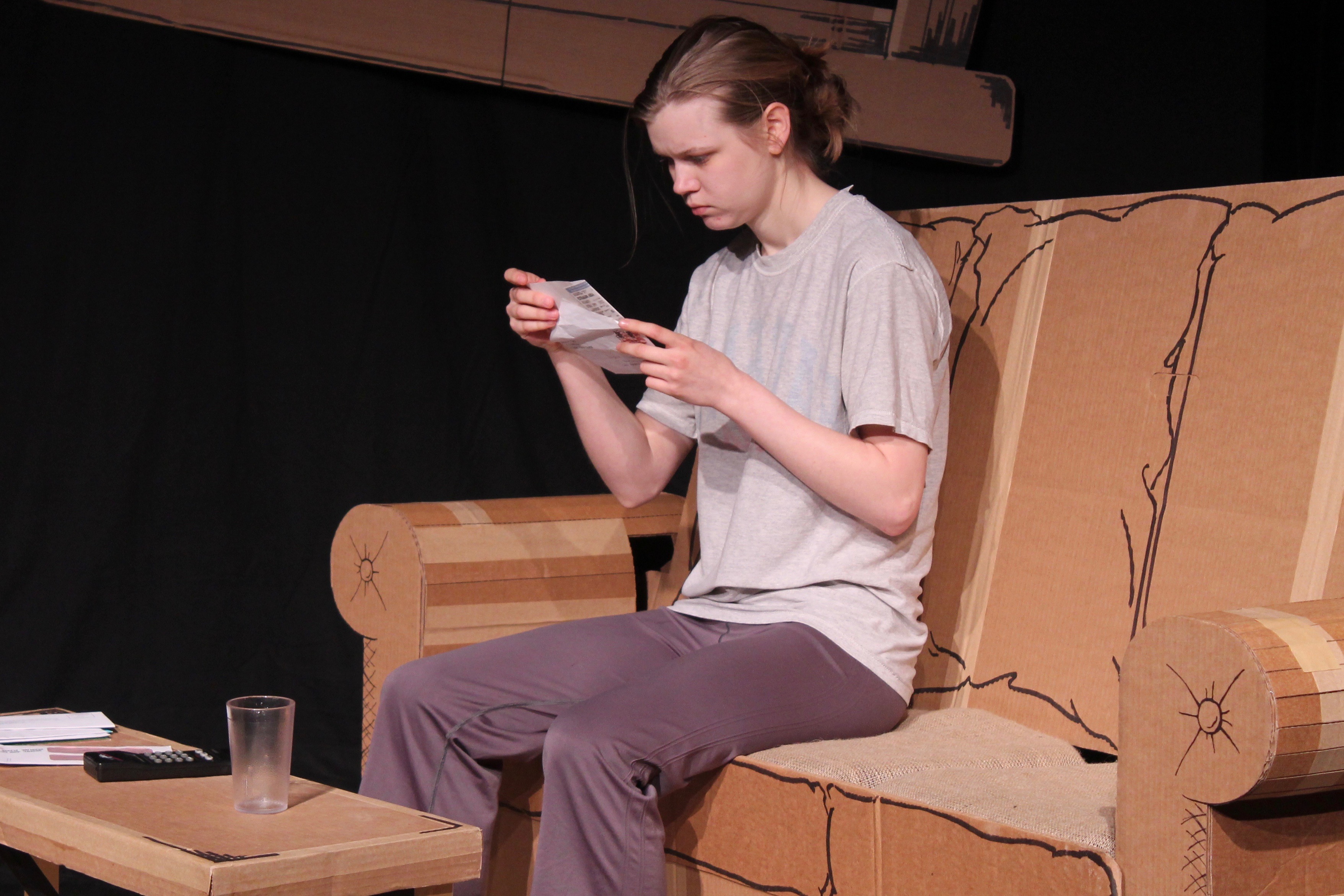 Combining â€œthe existential questions of John-Paul Sartreâ€ with â€œthe absurdity of Samuel Beckettâ€ in her play â€œGideon,â€ directed by Joan Kane for the stage of the Paradise Factory Theatre, Judith Leora gives the audience too much food for thought, which results in indigestion. Stuck in “the black hole of despair,” in their L.A. apartment, where mobile phones never work and the Internet has been down down for 10 days, Zoe (Rachel Cora Wood) and Aria (Phoebe Torres) are anxiously waiting for the cable guy, Gideon. As it often happens, being â€œunpluggedâ€ allows the two women to reflect on their lives and come to sad conclusions.

While the premise sounds enticing and has the potential for several interesting outcomes, the audience gets no satisfactory resolution. Even when the play is over, we have no clue where it was going and what the point was. Thus, it entertains us with a variety of strange characters, but leaves us perplexed.

On the one hand, â€œGideonâ€ explores such serious themes as depression, thoughts of suicide and being at a roadblock. These dramatic elements usually help us relate to the characters and feel their pain.

On the other hand, absurdity and the exaggerated drama of not being able to go online prevent us from taking the play seriously. As it does not seem that the show was supposed to be purely amusing, we end up feeling that we missed a very important point â€“ or that it was not properly developed.

With this said, the comical elements of â€œGideonâ€ are its best feature. The people who show up at Zoe and Ariaâ€™s apartment instead of the cable guy are more shocking than the whimsical commuters of the NYC subway. For example, a neighbor, Harriet (Connie Castanzo), does not hesitate to walk in and begin working out on the couch. Despite being a brunette, she is the perfect embodiment of the blonde stereotype, a sweet and gorgeous woman who lacks basic intelligence. Having learned about the Internet outage, Harriet has trouble grasping the fact that they donâ€™t even have â€œWee-Fee.â€ Still, she expresses compassion and tries to use her personal connection with the cable guy to have him come fix the problem.

Then there is also the landlady, Mrs. Banazewski (Amy Gaipa), who looks like a pop star in her tight bright pink pants, fancy sunglasses and sexy high heels. She is a woman in her 40s who never wants to grow old. Since she owns the house, she sees nothing wrong with just showing up in her tenantsâ€™ apartment with her autistic stepdaughter, Eden (Mary Monahan), on a leash.

The appearance of these characters brings chaos into Zoe and Ariaâ€™s everyday lives. All of the action takes place in their living room, and the setting remains unchanged. There is only a couch, a coffee table and a door, leading into the outside world. When the door is opened, we see a staircase going down. The setting is simple and tasteful, and it creates a good contrast to the quickly developing action.

It could only have gotten better if we saw the characters develop as well. However, they, like the setting, remain the same, leaving us with a sense that the play could be repeated over and over and each today would be just like yesterday and tomorrow. Even the visitors would always be the same people (except for the cable guy, who would have saved Zoe and Aria from the Internet withdrawal).

Therefore, if we had to sum up â€œGideonâ€ in a word, we would call it overwhelming. There is too much going on in this 70-minute-long play. Unpredictable like a natural disaster, the action develops in so many directions that it is hard to see the main idea. Is it a play about being stuck in the same place with no exit? Is it about the cable guy who might never show up and reconnect them? Is it an absurd comedy revolving around eccentric, on-the-brink-of-madness characters? To name a few, â€œGideonâ€ is about all of those things, and its message â€“ assuming there was one â€“ gets lost.