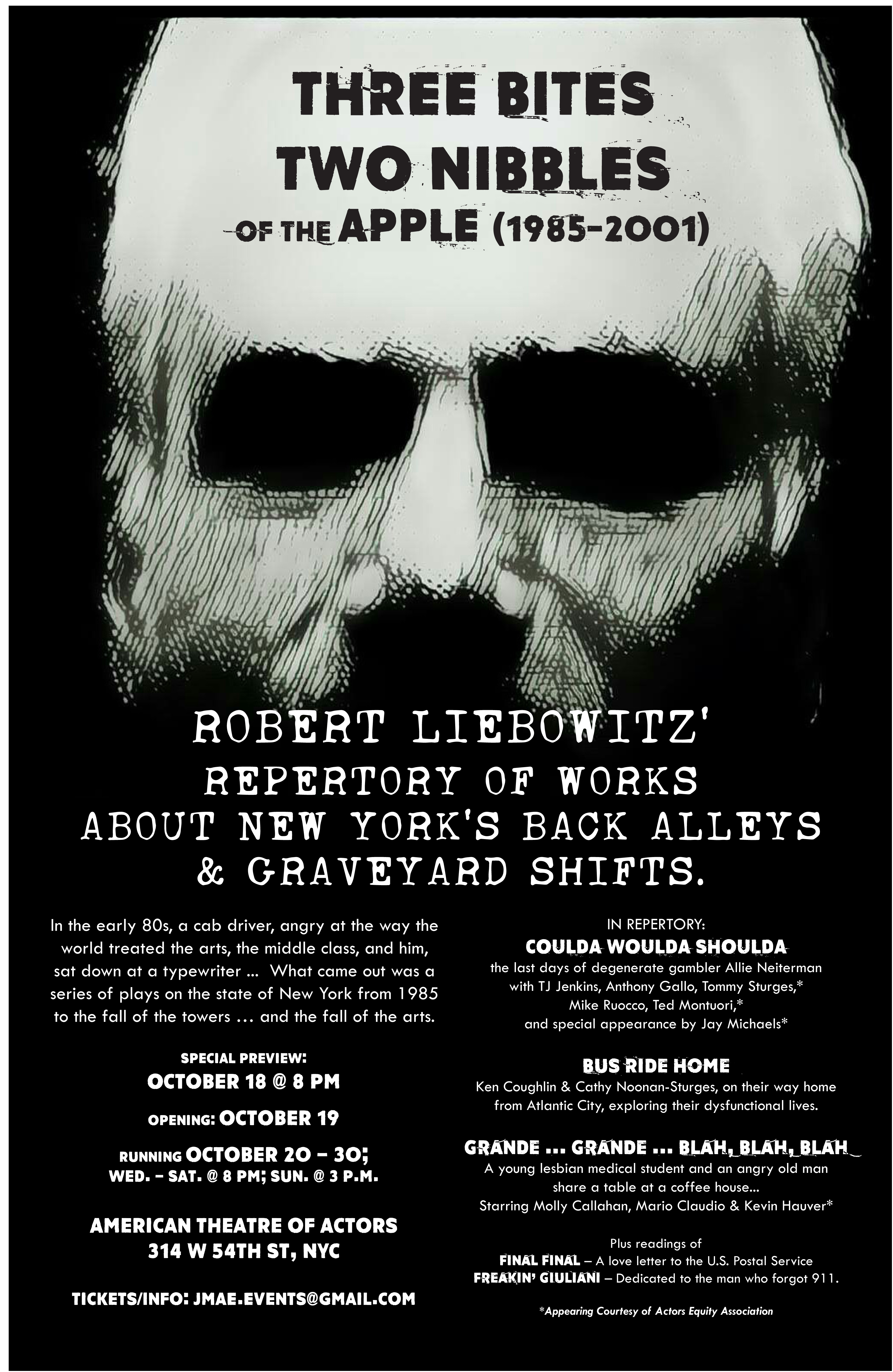 Review Fix chats with playwright Robert B. Liebowitz who discusses his upcoming run of Review Fix Exclusive: Robert B. Liebowitz Talks â€˜Three Bites of the Appleâ€™ (October 19 – 30; Wednesday – Saturday @ 8:00 p.m.; Sundays @ 3:00 p.m. American Theatre of Actors, 314 W 54th St, New York City), detailing the goals, creative process and hopes for the revival of three productions that have ben significant to his growth as a playwright.

In the early 80s – at the zenith of the off-off Broadway movement, an impoverished cab driver, angry at the way the world treated the arts, the middle class, and him, sat down at a typewriter and wrote his first play… and never looked back.Â  What came out was a series of powerful, naturalistic works on the state of New York from 1985 to the fall of the towers … and the arts … in 2001. Today, Robert B. Liebowitz is a celebrated play and screen writer as well as novelist and essayist, with several published works.Â  Liebowitz has reunited several of the original cast members from his various productions for this rep of revivals:

Grande GrandeÂ (young lesbian medical student vs. angry old man) features Mario Claudio & Kevin Hauver, and Molly Callahan, who is the daughter of two company members of Liebowitz’ from back in the day: Francis Callahan and Cynthia Granville, who created numerous roles in his productions including a world premiere at the Fringe Festival.

Coulda Woulda ShouldaÂ – Liebowitz’s flagship play, celebrated with awards and a legit off-Broadway contract run in 1997, depicts the last few weeks in the life of degenerate gambler Allie Neiterman. A character based on his father. For this, Liebowitz brought back Tommy Sturges, Michael Ruocco, Ted Montuori, and most recently,Â Jay Michaels, who served as the director and co-producer of the off-Broadway run. While Michaels is known for his work behind the scenes, he began his career as an actor. He will appear in this production as Barney Cutler the venomous loan shark.

â€¨Review Fix: What was the inspiration for this project?

Robert B. Liebowitz: The inspiration was the colorful language that gamblers use, including and especially my late dad.

Liebowitz: The art of playwriting is the art of the spoken word. How people use language is the original attraction.

Liebowitz: The real world of gambling–not the Guys & Dolls world, but the real world–has been hidden from public view. Maybe, just maybe, this will open a few eyes.

â€¨Review Fix: What did you learn about yourself through this process?

Liebowitz: To be flexible and open; to not regard the text as in stone. Actors, especially those on this particular production, have a contribution to make as well.

â€¨Review Fix: How does it feel to be a part of something like this?

Liebowitz: It feels that a good thing is being done; a worthwhile piece of art.

Liebowitz: The ultimate goal is to win both the Tony and the Pulitzer Price for Best Play. Perhaps down the line a film will be made.

â€¨Review Fix: What do you think your audiences will enjoy the most?

Liebowitz: Two things–the humor, and the charisma of the lead character, Allie Neiterman.