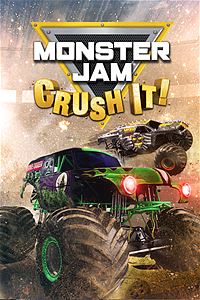 Monster Jam: Crush It! is a mask of excitement covering poor controls and what feels like an incomplete physics engine. The various game modes lack any real depth and each arena or track lasts only a matter of seconds. It feels as if the developers were not interested in making a functioning game and more so were interested in profiting off of the hype behind the official monster truck names associated with the title. The only plus side to the game is because of the incredibly short modes, it is a game that anyone can pick up and play for a short while without concern of eating up too much time.

At a price tag of $19.99, Monster Jam: Crush It! still feels a bit steep for how shallow the game is. The advertisement boasts â€œexciting physic based challengesâ€ and threatens â€œultimate destructionâ€ if the player fails. These fancy words, unfortunately, are not befitting for the end result. The physics in the challenges are only challenging for the sheer fact that there is little control over how they actually play out. A truck can hit a ramp and spiral out of control, flinging into the side of the map as they player drives along the invisible border of the arena.
With words like â€œultimate destructionâ€ it would seem like there would be more detail into the result of a failure, or even any destruction at all, but the truck simply flips and the player fails if it doesnâ€™t roll back over. The race mode the players start with lasts mere seconds, giving little room for error or fun. It seems like the developers wanted to focus more on the stunt mode, but with the wonky physics, it is hard to pull off any real tricks aside from a little hop over a stack of small cars.

The game does offer other modes such as a hill climb with a time attack or survivor mode. This is more reminiscent of the Trials Fusion title that came out for the Playstation 4, where it is 3D graphics pasted onto a 2D gameplay. The players go through ups and downs on various tracks and must adjust speed and angle for the best time as well as aiming to collect the letters C, R, U, S, and H for the ideal score and of course trophies.

Monster Jam: Crush It! feels like a half-baked game that could have been better if more time were spent on balancing control over the vehicle. It is enjoyable enough, and can even be addicting at points like trying to find a letter that was missed on the hill climb challenges. For a game series that has been around almost as long as the Monster Jam World Finals themselves though more detail could and should have gone into the game. It is lackluster compared to the predecessors of the Monster Jam title and seems to just be riding the fame of the name Grave Digger.