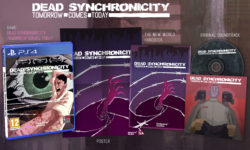 Review Fix chats with Dead Synchronicity developer Luis Oliván who lets us know why the point-and-click adventure is a must-play this holiday season as well as why the genre still matters, as well as his goals for 2017.

The game tells the story of Michael — a man with no past who must recover his identity and decode the two events that brought the world to the edge of collapse. The first is the so-called “Great Wave” — an inexplicable chain of natural disasters. The second is a pandemic that has turned humans into “the Dissolved” — infected beings with special cognitive powers whose sick bodies will eventually dissolve into blood. If Michael doesn’t hurry, he won’t be able to avoid the impending moment of “dead synchronicity” … when Time itself starts to dissolve.

Featuring a script with dystopian overtones, Dead Synchronicity pays homage to classic adventure games such as The Secret of Monkey Island, Broken Sword, and Day of the Tentacle — with more mature themes along the lines of I Have No Mouth, and I Must Scream and Sanitarium. Solve each puzzle to get closer to the truth — guiding Michael to a future he may (or may not) be ready to face in this disturbing addition to the adventure genre.

About Patrick Hickey Jr. 9752 Articles
Patrick Hickey Jr. is the Founder, Editor-in-Chief, Master Jedi and Grand Pooh-bah of ReviewFix.com and is the author of the book, "The Minds Behind the Games: Interviews with Cult and Classic Video Game Developers," from leading academic and non-fiction publisher McFarland and Company. He is currently the Assistant Director of the Journalism Program at Kingsborough Community College and is a former News Editor at NBC Local Integrated Media and a National Video Games Writer at the late Examiner.com. He has also had articles and photos published in The New York Times, The New York Daily News, Complex and The Syracuse Post-Standard. Love him. Read him.