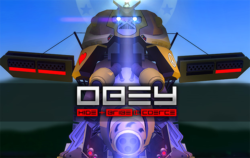 Review Fix chats with OBEY developer Jorge â€œDezâ€ Hernandez, who discusses the origin of the game, the long and difficult development process and how he feels about the final product.

Jorge â€œDezâ€ Hernandez: What you see now as OBEY started in 2002 as a very different idea. I had just graduated college, and since none of us recent graduates had jobs, we decided to think up some game ideas we could execute. The idea of the game (I think it was just called “death tower” or something at the time) did have a giant tower and players trying to take over the tower in a king-of-the-hill type of mechanic, but the human aspect that makes OBEY what it is hadn’t been thought up yet. I remember one of the main ideas of it was that every key on the keyboard would trigger a different weapon on the tower. The idea was simply to build the most asymmetrical king-of-the-hill game possible.

However the project never got started at all with those friends, and in later years failed multiple times in other attempts I made with different teams and partners.

Hernandez: I get asked this sometimes, but OBEY doesn’t have many parallels in video games. It wasn’t inspired by other games, but by political ideas, human dynamics/psychology, and power theory and memetics. This really came into play around 2014 when the basic mechanics were being implemented. Because one of the main project goals was to make the most asymmetrical game possible, it led me to ask: what is the most asymmetrical relationship between human beings? My answer is the master/slave dynamic (followed possibly by the parent/child dynamic).

As soon as I made this connection I realized the power of what this game could be and what the central idea was going to be: I would be making a human exploitation simulator. The game I always wanted to play and make had come into focus. If you want to ask simply about comparisons, it does have a lot in common with many board games (something I didn’t know until I was well into development), since at the time that I started I really hadn’t explored board game dynamics much (shamefully!).

What is interesting, though, is that I seemed to have re-invented many board game mechanics that I hadn’t known existed. I was happy to learn many of these mechanics had already been proven even before I had the possibility of testing them myself. Because I had never played a game like OBEY before, I didn’t know if they would be viable at all.

As far as video game comparisons go, the closest example I can come up with is: OBEY is a non-broken and balanced incarnation of the Counter Strike Jailbreak mod. There are other examples that can be found in obscure mods or parts of other games, though (like Day-Z, and Town of Salem ).

Review Fix: Let’s talk about the art. What inspired that?

Hernandez: My first thoughts on what OBEY should look like was to make a “gritty post apocalyptic environment.â€ The robot would be this dinosaur looking thing, inspired by mecha-godzilla and the players would be these tiny humans running around hiding in the rubble. However a large part of my career has been creating environment art, and no one knows how over-done and cliche it is to make yet another “gritty post apocalyptic” game than environment artists. Further, this would be difficult to execute as a lone developer, because gritty things take a lot of tweaking UV work and poly work to get right. I knew I could do better. I brought the issue up to an old friend and colleague named Matt Harwood (who authored nearly all the sfx for OBEY). Matt immediately trashed my post-apocalpytic considerations and said… no, this game is about contrast! The robot should be this horrible intimidating machine, and the world should be a beautiful forest, untouched and unspoiled.

The robot should clash completely with the environment.

The players should be forest animals.

Immediately I knew he was onto something and that is how the bunnies came to be as well. Baby bunnies were the most innocent and harmless creatures I could think of that could also make senseÂ in a forest environment. They would also make acceptable metaphors for human beings (I did consider making the player avatars human babies but decided it would be too weird/off-putting in aÂ commercial sense).

Finally, once I knew the motif that I wanted to try, I got to work designing a look for the forest that had to meet some important specs:

1) It had to be able to work with a lot of repetition since I knew I wanted to have player made maps, I decided the environment would be tile based.

2) The environment design had to have a level of detail and ‘look’ that could be produced and managed by a single developer (me). This was achieved by allowing for large flat colored areas, thatÂ would be broken up by lighting and decorations, as opposed to broken up in geometry and UV work.

3) It had to be low poly and efficient enough to draw a large area at once even if it was all on screen at the same time: player made maps would require it since anyone could design any crazy mapÂ and since the maps could in principle be viewed at any angle by a spectator, which I knew OBEY would have. I achieved this by designing everything to use 1 single texture and material.

And it is so: everything in OBEY (with the exception of GUI, the robo, and dropship) utilizes a a single material that references a single 2048×2048 texture.

Hernandez: To be honest, development has been extremely difficult and taxing. When I started, I think for me a big part of my motivation for doing the project was to answer the question of whether I am even capable of completing such a thing. I discovered the answer, but also I discovered that for a single dev to build a project with the complexity and scope of OBEY is not a human thing to do. Besides the effects on my personal life (and there is no way around this no matter the scope of your game, it will have SOME effect), I also faced a lot of failures that I simply muscled through. The Kickstarter I ran for OBEY failed, I also failed to get funding to complete production (even from indie centric publishers), and financially OBEY has so far not been able to fund its own dev.

So OBEY right now is still very much a passion project.

Nowadays, I work on it at night, since early in 2016, financially, I was forced to get a full-time job. I really wanted to finish it before doing that, but my choices became either compromise the project andÂ put a lid on it and ship it, or continue working on it to make OBEY what I think it should be while working on it on the side with no expectation of financial success. I chose the latter.

Review Fix: With all the competition in the indies now, how difficult was it for you guys to try and make something that stood out?

Hernandez: I knew no one was ever going to make any game like this unless I made it. So for me, it wasn’t an issue to try to make it stand out. It was unique from the start.

Hernandez: There is no other video game remotely like it. If you want to play a game built by a developer who said “if I never make another game, this is the one I want to make”, play and try to master OBEY. It is unique.

Hernandez: From day one, I wanted to avoid gimmicks and just build a solid title that would stand the test of time. I wanted to build something with the depth of chess, with a metaphor as powerful as a Chomsky article.

I hope it is remembered as one of the first games to make the gameplay itself have meaning. There are only a handful of other games I have ever seen do this. Games by Jason Rohrer (ie Castle Doctrine, Passage) and Brenda Romero (The Mechanic is the Message) are the only ones I know of.

In OBEY, the players themselves mirror all kinds of power structures in life in trying to win (corporate, religious, governmental, parental etc). Making it DRM-free is also part of trying to make OBEY stand the test of time. My hope is that it will always be playable.

Hernandez: I want to build a deep game of the likes that no one has ever played. If you want to play anything like it, there will be only one game to run: OBEY. I also want the game to have meaning beyond its facade and motif. Even though it isn’t finished, so far I do believe OBEY is already these things.

Hernandez: Well, if OBEY does well on release I have several ideas that I would love to hit next. However, if it doesn’t, it will probably be the last title I develop. And I have made peace with that possibility.

Hernandez: I believe OBEY is the most ambitious project to ever be published by a single developer. As far as I know, there is no title made by a single dev that has all of the following features (or equivalent features):

The games published by a single dev I know of have three or four of the above at most, hence I think it may be the most ambitious game ever made by a single dev.