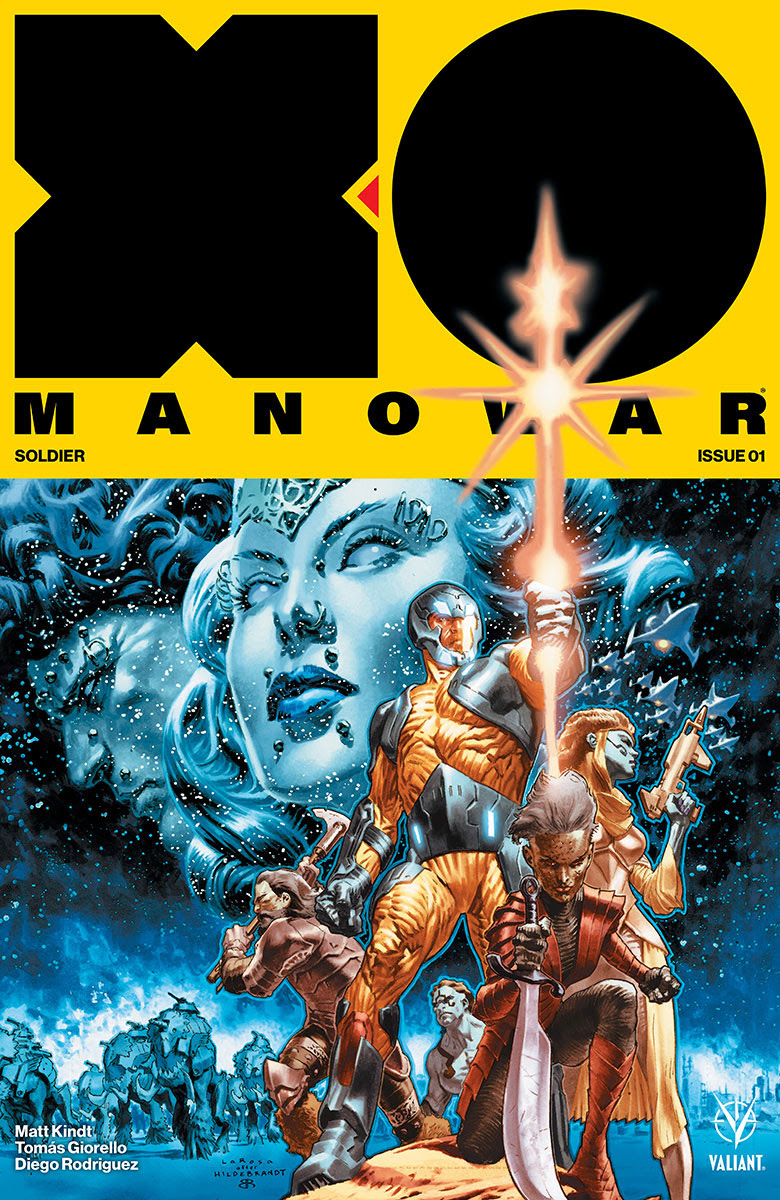 He should know better. Aric of Dacia knows about war. And he is no one’s cannon fodder. But in ‘X-O Manowar: Soldier’ he seems to have forgotten the lessons he’s learned as Aric the man.

On a distant planet, after leaving behind the problems of earth, Aric has become a farmer, taken a lover and sees yet another race of people preparing for war. What Aric chooses not to see is just because your basic needs are met doesn’t mean you don’t have anything to fight for. People have a right to decide what is best for their own lives. To live wherever you want, choose their own profession, or formally educating yourself should never have the term ‘allow’ in front of it. So if that means going to war. So be it. Still, just when you believe Aric left his humanity behind on earth, he listens. Hearing the words of his lover he may understand why this war is just in her eyes. However, a former leader knows all too well the machinations of those in power.

What will continue to work well in this first issue as in the remainder of the series is the combination of narrative and artwork. From the cover showing a majestic Aric in the X-O armor, surrounded by warriors with looming faces overhead, you just know that you’re on a journey that is both complex and multifaceted. More striking is the image of Aric, sans armor, tending to his land. We are reminded that he only has one arm. In those panels he seems to will himself to be a complete man. Although, there is billowing below the surface, a tinge of bitterness and resentment towards the sentient, alien that he has depended on. After all he never would have made it back to earth or to the world he’s on now without it. Essentially, Aric would have still been a slave of the Vine (an alien race who kidnapped him from earth and where he initially lost his forearm escaping their ship. Only to return centuries later to a planet and era he could not recognize). Whether he likes it or not he needs the X-O armor more than it needs him. It’s an important relationship. Aric shouldn’t see the blue and gold as a tool to be used. It is not a sword to be wielded. Rather, it is an essential part of him. Coming to terms with that may be the only way of finding peace.

Still, the subtitle of this comic is entitled ‘soldier.’ The road that writer Matt Kindt is sending Aric on will be bloody and violent. Kindt will lull you into caring about some of these characters only to have many of them meet a savage end. He’s good at teaching his readers life lessons by using subterfuge alongside naked truths. And this comic book series will have much to teach.

About Donna-Lyn Washington 609 Articles
Donna-lyn Washington has a M.A. in English from Brooklyn College. She is currently teaching at Kingsborough Community College where her love of comics and pop culture play key parts in helping her students move forward in their academic careers. As a senior writer for ReviewFix she has been able to explore a variety of worlds through comics, film and television and has met some interesting writers and artists along the way. Donna-lyn does a weekly podcast reviewing indie comics and has also contributed entries to the 'Encyclopedia of Black Comics,’ the academic anthology ‘Critical Insights: Frank Yerby’ and is the editor for the upcoming book, ‘Conversations With: John Jennings.’