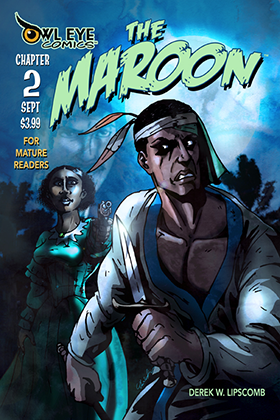 Review Fix talks with comic book creator Derek W. Lipscomb about his inspiration for his series The Maroon and the future of Owl Eye Comics.

Review Fix: How did you get started in comics?

Lipscomb: It actually goes way back for me. Around 1977 or â€™78, before I was old enough to read comics, I was mimicking my two older brothers who would create their own from folding paper together and drawing them. The both of them always had Marvel and DC comics scattered about the house, so I knew the characters, but was too young to read their adventures. I already liked to draw at an early age, and I believe I was born at the perfect time pop-culture-wise. Star Wars had just blew up, and I was watching cartoons like Battle of the Planets and Johnny Quest, Godzilla movies on Saturday morning Creature Double Feature. All of these ingredients inspired me to use this medium in creative ways.

But if we are talking from an industry stand-point? It took years for me to get here. I stuck to my guns throughout my youth that I would be involved with the comics industry one way or another. In the 90â€™s after I graduated high school, I moved out to Southern California and began to connect with like-minded individuals who wanted the same. I must have worked with over 20 different creative types, often finding that everybody loves the idea of creating comics, but nobody wants to do the work, or expects to make good money off the bat.

In 2007 a friend and I accidentally became published when we submitted a book to a printer
(ka-blam.cm) in order to get into San Diego Comic Con as â€œProfessionalsâ€ (i.e. free). The printerâ€™s sister site (indycomics.com) put it up for sale and it forced us to move forward with the series! We did all of the industry experiences like conventions, interviews and signings. We put out that series and a 2nd title since up until earlier this year, where I decided to work on a more personal effort.

Review Fix: After reading the first few issues of The Maroon I see a well-researched and love of history and folklore. How did you decide on this time period and setting for your narrative?

Lipscomb: The folklore part is easy, as it usually contains fantastical elements, and that caters to someone who loves comics. Mythology, cryptozoology and tall tales all make for proper ingredients when it comes to creating a story like this.

The setting was born out of researching my family lineage. My mother had always told us that we had great-grandparents from the First Nation, but I never saw any concrete proof. It was an itch I wanted scratched. Being African-American means that a large portion of your family history is missing. Tracing roots is difficult due to lack of documentation and frustratingly tedious work. As I entertained the idea, I was curious as to how common the African/Native American mix was out there.

I was in a Barnes & Noble and stumbled across this book called Black Indians: A Hidden Heritage – William Loren Katz and learned about the large communities of Black Seminole peoples who were viewed as potentially threatening because they were extremely self-sufficient. As a result, the US Government had 3 wars with them forcing them far west and into Mexico. I was stunned, as I never got this history lesson in school. Perhaps it didnâ€™t â€œpush the great story forwardâ€?
Anyways, I began to imagine a character who was on the run, but was a good man and helped those in need along the way. He was along the same idea as Zorro or The Lone Ranger, but he was a man of color, which was very important for me.

Review Fix: Why is your protagonist nameless?

Lipscomb: To give him a touch of mystery. I always liked the â€œMan with no nameâ€ from the spaghetti westerns played by Clint Eastwood. I wanted the reader to instantly wonder about him. It was my first foray into writing a series, so I needed to engage the reader, and seemed like a good fish hook to use. Also, I honestly could not think of a good name for him! He has a â€œtemporaryâ€ name now in the series.

Review Fix: With the monotony and lack of diverse/interesting characters of larger comic book imprints, where do you see indie comics such as The Maroon?

Lipscomb: In a very good place, honestly. Eventually, the status quo becomes mundane. I love seeing live action exposure of characters I grew up reading, but we all know representation was barely there. Now with the advent of cinematic translation, we are getting a surge of mainstream overload, specifically in the super hero genre. Eventually, that will tire and studios will look to other ideas, and what is great about indie comics is that they are the next goldmine (I believe) for these production companies to harvest fresh ideas.

Leaving the idea of mainstream media exposure out, indie comics have always been great wells of bold ideas. I think there is a wider range of indie readers out there whoâ€™ve grown frustrated with the status quo of comics attempt to constantly reboot and re-invent their same ideas.

Review Fix: If you could go anywhere at anytime in history where would you go and why?

Lipscomb: Uhhhâ€¦(laughing), it wouldnâ€™t be the time period I set for The Maroon, thatâ€™s for sure! Thatâ€™s actually a hard one. I have always been fascinated with ancient civilizations, so to witness, say, the Aztecs or Egyptians in their heyday, prior to any invasive cultural influence would be remarkable.

Review Fix: With the trend of comic books leaping into other media genres, would you like to see The Maroon being animated or live-action on the small or big screen?

Lipscomb: The Maroon would probably work best as an HBO series due to itâ€™s episodic formatâ€¦and graphic nature. As cool as it would be to see The Maroon translated to another visual medium, I still prefer the comics platform. Thereâ€™s literally no budget restraints with what you can do on paper.

Review Fix: What sort of impact do you want for this comic book series?

Lipscomb: First and foremost, to entertain and offer a visceral experience both visually and in a narrative sense. My other intent was also to open the door wider about elements of history that get lost in the shuffle of the â€œbigger pictureâ€, and merge that with my love of pulp, supernatural and mythology. I hope I am able to achieve these and continue doing so.

Review Fix: Whatâ€™s next for you?

Lipscomb: I have a few story arcs Iâ€™d like to explore with The Maroon, so I would like to have a few volumes produced. Iâ€™d imagine this will encompass the next few years to achieve. After that, who knows where my next influence will sprout from? Thatâ€™s what I love about comics, there is no limit to what you can dream.