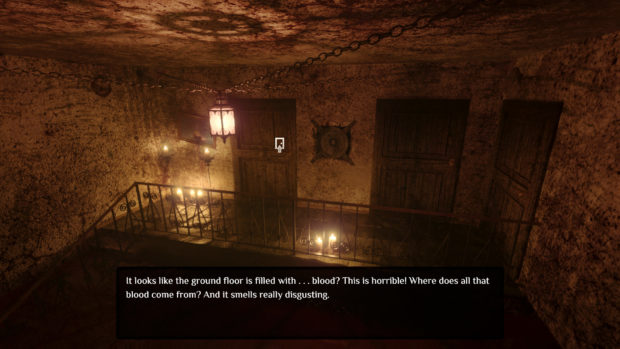 When thinking of the greatest scary video games of all time, one series that comes to mind instantly is Silent Hill. Providing some of the most disturbing visuals and heart-pounding scares that, for the most part, still hold up to this day. In the case of Without Escape, developer Bumpy Trail Games must absolutely adore the Silent Hill series, because most, if not all of the themes, visuals, scares, even the save point, are ripped straight from the nightmarish hellscape of the quiet little resort town in Maine. Because of this, the game feels wholly unoriginal. But there is a silver lining to this blood-soaked cloud.

Without Escape is a point and click horror adventure that upon first glance seems like it will be a fairly scary affair, establishing a creepy scenario with some eerie background music to top it off. Although, after spending a few minutes looking for a key to unlock a drawer to get another key to unlock a door, youâ€™ll realize that there is nothing to be afraid of. There is no terrifying enemies to attack you, no consequence to your actions, and nothing more than some gory setpieces and creepy background music to put you on edge. Itâ€™s not all negative, though. Without Escape features some surprisingly clever puzzles that provide a solid challenge and require you to think critically.

If it wasnâ€™t painfully clear that Without Escape hits a few too many of the same points as Silent Hill, about halfway through the game you are transported an â€œotherworldâ€ type scenario. Your house becomes a twisted and grotesque gallery of gore, complete with bodies impaled on walls, grated iron floors, gallons upon gallons of blood, and a â€œstrange symbol that makes your head hurtâ€ that acts a save point. Just like the one from Silent Hill three. 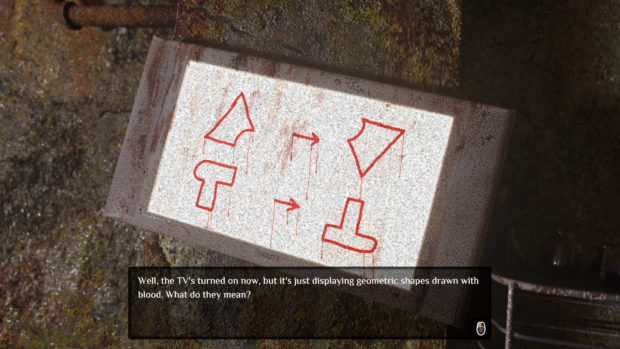 Fortunately, Bumpy Trail Games took more than just the themes and visuals from Silent Hill, it also took its well-crafted puzzles. Albeit without the genius of Hiroyuki Owaku. One of the best puzzles in the game occurs when you come across a locked box with a four-digit code. You have to use inconspicuous context clues hidden in the environment to figure out the answer. For such an unoriginal game, this puzzle, in particular, was astonishingly well thought out. There are several examples of solid puzzle design and they are easily the best part of the game.

In true old-school fashion, Without Escape features full motion video, or FMV cutscenes. While they are a novelty that is rarely used in games today, they are a nice touch that really helps make the game feel like a throwback to the early 90â€™s point and click adventures, perhaps a bit too well. After getting used to todayâ€™s standard of graphics, Full Motion Video definitely shows its age, and why itâ€™s been phased out for in-engine cutscenes.

Without Escape also features six different endings that you can possibly get depending on your actions. How long it takes to progress through the game, as well as if you solve all the puzzles that are laid out before you among other factors determine what ending you get. This is also a nice feature that facilitates multiple playthroughs. Puzzles also change slightly between playthroughs, so it wonâ€™t be a breeze trying to unlock every ending. 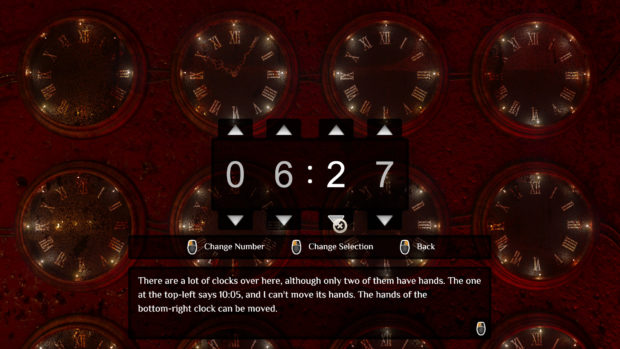 Overall, Without Escape by Bumpy Trail games is a solid game that features wonderful puzzle design, that could have benefited from some sort of mechanic to add a level of pressure on the player to make the game scarier. It is supposed to be a horror game after all. The game relies a bit too heavily on the homage it pays to the Silent Hill series and comes of as unoriginal. But just because it is unoriginal does not mean it isnâ€™t worth playing. If you are a fan of challenging puzzles, you will definitely enjoy your time with Without Escape.

The Puzzles: The puzzles feel like they would belong in one of the original three Silent Hill games, and that is truly an accomplishment that Bumpy Trail Games should be proud of.

The Music: An eerie and off-putting score that Akira Yamaoka, the famed sound designer of the Silent Hill series could appreciate.

A Horror Game Should be Scary: Unfortunately, Without Escape is not scary, and a game that is being sold as a point and click horror adventure should be consistently unsettling at the very least.

Unoriginal: It is clear that from the very start of the game, Bumpy Trail Games wanted to pay homage to the Silent Hill series. But too much use of the same themes, visuals, and ideas make Without Escape feel unoriginal almost to a point of plagiarism.

Final Thoughts: If you grew up in the early nineties playing point and click horror adventures such as System Shock and Clock Tower, you will definitely enjoy this game. You just wonâ€™t be scared by it.