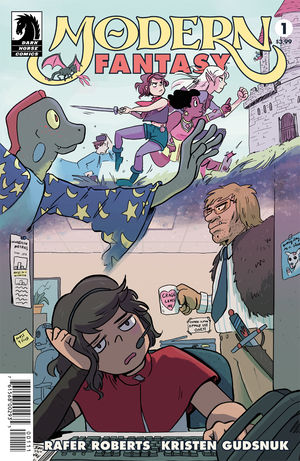 Review Fix chats with comic writerÂ Rafer Roberts on his current on-goingÂ series MODERN FANTASY, on the world-building andÂ ragtag bunch of misfits charactersÂ of the series, and hisÂ reunion with artist Mike Norton on his upcoming series, GRUMBLE.

Review Fix: How did MODERN FANTASY come to be?

Rafer Roberts:Â It all started due to my desire to work on something with Kristen Gudsnuk (artist of MODERN FANTASY), though at first, I wasnâ€™t sure what we should do. Kristen mentioned that she was interested in doing something with magic, which got me daydreaming about fantasy scenarios, Dungeons and Dragons, and the like. That led me to wonder what the world today would be like if every fantasy novel or role-playing module was our actual history, and the rest of MODERN FANTASY sprung out from there.

Review Fix: What has it been like to work for Dark Horse Comics?

Roberts:Â Itâ€™s been a blast and even better than I could have hoped for. Our editors have been super-cool and incredibly helpful, and the marketing team has gone above and beyond. I really couldnâ€™t be happier.

Review Fix: How would you describe the world of MODERN FANTASY?

Roberts:Â The main cast follows a traditional campaign party, with a wizard, a thief, a ranger, archer, and so on. But our ranger works a low-paying, dead-end data entry job while dreaming of adventure, and our wizard sleeps on her couch all day and sells Dank Crystal all night.

The way I most often describe the comic is if the cast of Broad City lived in a world that was sword and sorcery themed, and that they had to prevent the apocalypse while getting on with their day-to-day lives, thatâ€™s MODERN FANTASY.

Review Fix: Being that the protagonist Sage, is a young person working in an office, searching for a purpose in her life, or rather an adventure, how is she relatable to MODERN FANTASYâ€™s audience, particularly millennials?

Roberts:Â I tried to write the book in such a way that it would appeal to anyone who ever toiled away their lives doing meaningless, menial office work. A good part of building the world of MODERN FANTASY was done while at my day job, daydreaming about my co-workers as orcs and goblins, my bosses as beholders, but still performing the same tasks with the same personalities.

I think thatâ€™s the heart of MODERN FANTASY. We all do stuff we donâ€™t want to do but need to do, in order to survive. Whether weâ€™re 40-year employees doing the same job over and over, or a young worker experiencing the daily drudgery for the first time. Weâ€™re all dreaming about adventure, excitement, and in some cases, a more satisfying job with better benefits.

Review Fix: Why fantasy, why not instead, science fiction?

Roberts:Â I think that with fantasy, thereâ€™s a more general understanding of the traditional tropes: dwarves, goblins, rangers, etc. With science fiction, there are so many different flavors that creating â€œstandardâ€ characters doesnâ€™t work as well.

Also, I wanted to name a character â€œLizard Wizardâ€ and that works a lot better in the fantasy genre!

Review Fix: Whatâ€™s next for Sage and the crew? 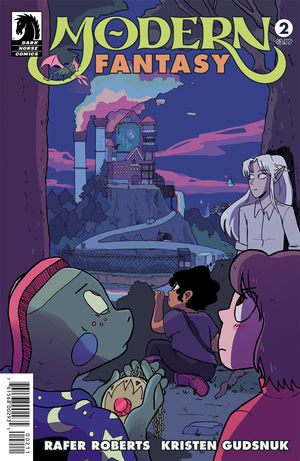 Roberts:Â Hopefully a second series! Without giving away too much, and assuming we get to do more, the second series would focus on Gondra, Sageâ€™s dwarf maiden roommate and her â€œadventuresâ€ following a family reunion. Also, more office antics with Bock-Darr the Mighty.

Review Fix: Whatâ€™s your upcoming comic, Grumble, all about?

Roberts:Â Eddie Endino has been using stolen magic to aid his cons and schemes for decades, leaving him with nothing but enemies. Tala Palachio, the part human, part-demon teenage daughter of one of Eddie’s old crewmembers, is being hunted by inter-dimensional sorcerers hell-bent on eradicating impure magic from the universe. When Tala goes to Eddie for help, it sets off a chain reaction of magical chaos and destruction, beginning with Eddieâ€™s accidental transformation into an adorable yet grumpy dog. Now on the run through Baltimoreâ€™s grimy underworld, Eddie and Tala must keep themselves from killing each other, long enough to escape the forces after them both.

Review Fix:Â Whatâ€™s it like to reunite with Mike Norton for this project?

Roberts:Â Itâ€™s an absolute blast! Mike is one of my favorite artists Iâ€™ve had the pleasure to work with (though I really haven’t worked with anyone I didnâ€™t like), so getting a chance to reunite for something as cool and fun as GRUMBLE is a real treat. We have a real similar taste in comics and the comics we like to make, which makes the collaboration that much more enjoyable.

Weâ€™ve also got Marissa Louise on colors, whom Iâ€™ve been a fan of for a while now. Marissa isnâ€™t afraid to take chances, to push herself, which I admire. The fact that these chances pay off so well just makes it all the better.

I never had the opportunity to work with Crank!, our letterer, prior to this, but Iâ€™ve really come to admire how effortless his lettering appears, even though we do some pretty unusual things. Everyone on GRUMBLE is doing amazing work, and I really couldnâ€™t be happier with how everything is going.

Review Fix: Being that Baltimore is the primary location of the series, whatâ€™s the research process like in bringing the city to life?

Roberts:Â Iâ€™m in Baltimore about half of my week nowadays, splitting the time between the day job in western Maryland. Iâ€™ve come to really love this city and all of its weirdness and distinct personality. Most folks think of The Wire or the works of John Waters when thinking about Baltimore; and both of those things are fairly accurate, depending on what neighborhood you might find yourself in. For GRUMBLE, Iâ€™m trying to move our heroes around the city to experience the touristy hellscape of the inner harbor; the intersections between traditional neighborhoods and the slow creep of gentrification, as well as, some of the more forgotten neighborhoods. Underneath all of that, no matter where one finds themselves in Baltimore, there is magic. Thatâ€™s all Iâ€™m looking for when I drive around this city scouting locations for Eddie and Talaâ€™s misadventures: Magic. 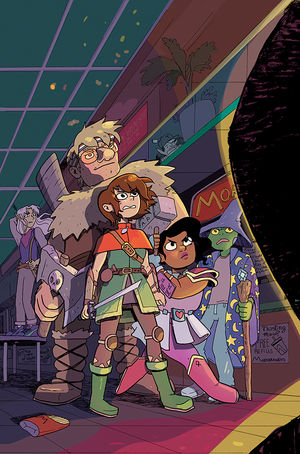 Review Fix: How do you think your work on Modern Fantasy will help or influence you in Grumble?

Roberts:Â Everything I work on canâ€™t help but influence everything else, though I do try to make sure that Iâ€™m not repeating myself on any two concurrent projects. Writing two of the same comic every month sounds incredibly boring to me, though I imagine it would be easier switching between them!

For example, while both comics have magic in them, I went slightly out of my way to make sure that the magic is a different flavor in each. GRUMBLE is also far more cynical than MODERN FANTASY. Both comics are the best comics I could write at the time and are both very good (if I do say so myself)!

Review Fix:Â Anything else you would like to add?

Roberts:Â Just that I hope people enjoy GRUMBLE when it comes out in November, and that they let their local retailer know to order a copy for them. I also hope that people continue to enjoy MODERN FANTASY and to pick up the final (for now) issue at the end of September and the TPB collection in January!

Folks can follow me on twitter @plasticfarm for updates, or keep on eye on the less-frequently updated websiteÂ http://www.plasticfarm.com

About Brian Moreno 36 Articles
As a fanatic of popular culture, Brian Moreno is into anime, comic books, films, music albums, video games and so much more and when given the chance, he likes to review them. He is into Super Mario, Batman, Daredevil and Star Wars. He also enjoys long walks on the beach and watching the sunset.