The Unlikely Legend of Rusty Pup is the brainchild of Chris Seavor, better known for his work on Conker’s Bad Fur Day. The game combines dystopian steam-punk aesthetics, a dangerous and oppressive atmosphere, and crushing difficulty. You traverse this hellscape as a hopeless robotic puppy, just trying to survive.

Akin to Souls-Borne games, death is inevitable. You will watch Rusty Pup die. Over, and over, (and over,) until you stumble upon the correct path. It’s almost as if you’re not supposed to enjoy the game. It’s common knowledge that killing a dog is the most unforgivable of sins, even a robotic one.

That’s where the similarities of this game and the action-RPG series end. Mechanically, the game is a point-and-click puzzle platformer. You salvage materials and use them to build a safe path to the end of the level. As a concept, it’s relatively simple. But simple does not mean bad. 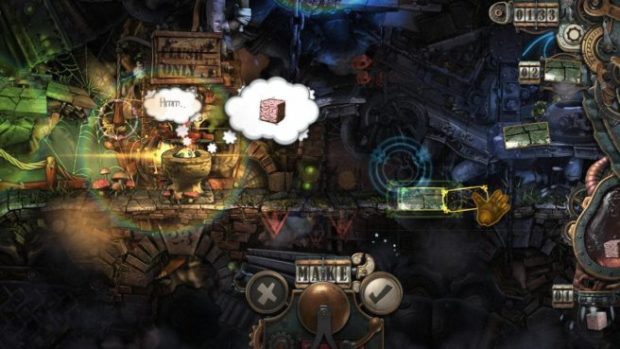 This game is difficult. Brutally so. It will test your patience as you repeatedly send Rusty Pup to his impending doom. The game offers little to no explanation of the mechanics. You don’t directly control the titular character. You have to figure out how to influence their movements, so they don’t throw themselves into a meat grinder…repeatedly.

The road to the end of the level is always a bumpy one. You have to circumnavigate tons of insta-kill traps, deadly pitfalls, and Rusty Pup’s crippling fear of the dark. You can easily die a hundred times just trying to overcome one obstacle. But overcoming these obstacles makes the grind worth it; like pulling a bad tooth. The struggle is a painful one, but the relief when it’s over is indescribable.

Fun isn’t the right word to describe the gameplay of Rusty Pup. Well, it is if you’re a masochist. But it’s most definitely addicting. You’ll grind away at the same hazards for what seems like minutes, but look up, and it’ll be an hour later. The slow and steady pace of progression is captivating.

What makes The Unlikely Legend of Rusty Pup special though, is the charming and malicious in-game world. Seemingly ripped from the mind of Tim Burton, everything from the narrator to the soundtrack has a sinister charm akin to The Nightmare Before Christmas or Corpse Bride. It’s cutesy but in a homicidal kind of way.

Visually, the game is beautiful. The steampunk-inspired art style lends itself well to the eerie air of the game. The game makes wonderful use of light, casting foreboding shadows on upcoming obstacles to increase tension.

The sound design of the game is excellent as well. Danny Elfman would be proud of the soundtrack. Every shriek of industrial machinery and grinding of gears immerses you in the world of Rusty Pup.

The best part of the game though has to be the narrator. This menacing voice treats you to a limerick describing the gruesome death you just witnessed. The narrator perfectly encapsulates the dark sense of humor that saturates the game. After a while, you’ll find yourself angrily parroting these earworms back at the disembodied voice. If anything, the narrator is instantly memorable. And that quality means the game is doing something right.

Even though the Unlikely Legend of Rusty Pup might not be remembered in the same vein as Conker’s Bad Fur Day, it’s an immensely satisfying and rewarding experience. The puzzle design is brilliant. It’s viciously difficult but profoundly gratifying in the end. Those brief “ah-ha” moments become a drug after a while. The feeling of euphoria after finally getting past that one freaking hazard is worth the hours of bashing your head against the wall.

The Dark Sense of Humor: The grim nature of the game could come off as depressing. But its tongue-in-cheek style lightens the mood.

The Narrator: The nursery rhymes of Rusty Pup’s narrator are murder scenes turned to prose.

Crushing Difficulty: Be warned, The Unlikely Legend of Rusty Pup is not for the weak-willed. It will test your patience. Though, not so much a negative as something that will dissuade potential players.

This game is morbidly charming. The little bucket of bolts could be an adorable avatar that is instantly sympathetic. You want to persevere for the sake of Rusty Pup, even though the idea of smashing your keyboard becomes progressively more enticing after each death.

Richard Corben seems to be on a mission to make a comic out of every Edgar Allan Poe story. So...