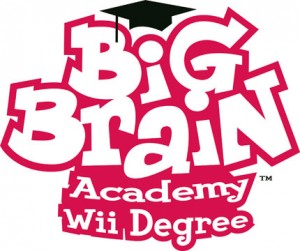 A smash-hit on the Nintendo DS, Big Brain Academy on the Nintendo Wii and is chock-full of the same brain-teasers and casual gameplay mechanics that made it so successful in the first place, thanks in part to the intuitiveness and ingenuity behind the Wiiâ€™s controller.

After one look at the Wii, it doesnâ€™t take a rocket scientist to see that most of the games on the Nintendo DS can be successful there. However, as gamers have seen in the past with games like Cooking Mama and Pokemon Battle Revolution, a simple dirty port with enhanced graphics alone isnâ€™t going to get the job done. In the case of Big Brain Academy: Wii Degree, not only does the game have the same casual feel of itâ€™s older brother on the DS, it attempts to incorporate the microphone in the Wii-mote in ways never used before, making the game feel fresh and new and not like a shoddy sequel.

While the end result isnâ€™t the best in the world, as the Wii-moteâ€™s mediocre sound quality somewhat hamper the overall gameplay experience, Big Brain Academy: Wii Degree is still a blast to play and even better with friends.

Utilizing five different categories to find your degree of intelligence, Big Brain Academy tests your wits by having you do everything from simple arithmetic to complicated puzzles, utilizing the Wii-mote as a light gun to quickly pick the right answers to the questions. Nowhere near a hardcore gaming experience, Big Brain Academy is best served as the game you play before or after you embark on a four-hour venture in your favorite MMORPG or FPS.

However, that doesnâ€™t mean that it isnâ€™t capable of holding your attention for long periods of time.

Despite not having great graphics and sound, the gameplay in Big Brain Academy is so addictive that youâ€™ll often wonder how it manages to take up so much of your time. The simple object of trying to raise a grade that marks your intelligence may not seem too enthralling an objective to meet at first, but after a few plays, your pride will take over and force you to continue playing until you find a way to raise your score. Add a few friends into that mix as well and youâ€™ll create a blitzkrieg that lasts into the wee hours of the night, waiting for one gamer to claim the top of the intellectual totem pole.

That alone makes up for the fact that most of the gameâ€™s audio comes out of the minuscule Wii-mote speaker and that the gameâ€™s graphics look like 2-d cel-shaded sprites from the N-64 era. Considering this, perhaps Nintendo has found a way to make a game that doesnâ€™t need great graphics or sound, or any story for that matter, in order to be a success. If that is the case, then Big Brain Academy would have to be the first game that fits that mold.