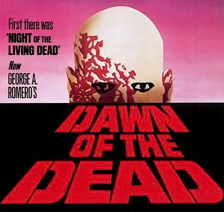 Over 30 years after it’s original release, George Romero’s â€œDawn of the Deadâ€ is still a horror classic that begs to be seen.

Featuring the amazing gore effects of horror legend Tom Savini, who later went to become a pioneer in the industry, going on to work in other notable horror films like â€œFriday the 13th and â€œCreepshow,â€ â€œDawn of the Deadâ€ remains strongly atop the horror genre today because of Savani’s masterful work, but it’s ultimately the exceptional script that gives it the most staying power.

Much like Romero’s other masterpiece, â€œNight of the Living Dead,â€ â€œDawn of the Deadâ€ keeps the viewer on a roller coaster ride from start to finish. It’s far from the type of predictable horror movie that has you screaming at the screen due to the incompetence of both the actors on screen and the development of a haphazard plot. Instead, Romero’s films keep the watcher guessing and maintains a realistic timbre that wasn’t seen in horror films 30 years ago and isn’t seen in this day and age either.

â€œDawn of the Dead,â€ especially prescribes to this due to stellar performances from the cast and a script that makes sense, something rarely seen in horror films.

The flow of the story is so viscous at times that it’s almost as if you can imagine the events in the film occurring in real life. Three decades after its release, the film will still make the hair on the back of your neck stand up. Because of this, many have championed Romero as a controversial entity in the genre and someone who will forever be imitated and hailed as an innovator. However, more than anything else, Romero knows how to tell a good story, creating relate-able characters and putting them in situations that bend our reality, rather than distort it and make it unbelievable.

That, my friends, is the essence of true horror.

However, without the acting performances of little-known actors David Emge, Scott H. Reiniger, Gaylen Ross and Ken Foree [Halloween, The Devil’s Rejects], the only actor to garner consistent work after the film, â€œDawn of the Deadâ€ may have never been in a place to enter our dreams and captivate us for decades. Over the course of the 127-minute film, the quartet is in a fight for their lives, but manage to squeeze in a few laughs and some heartfelt moments while attempting to survive seeming inescapable battles from both zombies and reckless bikers in a desolate mall. It’s almost as if Romero wanted to create a bloody version of a â€œScooby Dooâ€ adventure and show what would really happen if zombies walked the earth.

In spite of all of this, the film is far from perfect, as the opening 10 or 15 minutes are a bit slow to put the story together. It is here where some impatient couch potatoes will opt out of the film, failing to see what the film is trying to project, which is the anarchy and unstableness of our society and how it is not yet ready to defend itself against a greater and misunderstood evil, death. Nevertheless, things eventually come together in a way that no horror film has been able to duplicate since.

It is because of this that â€œDawn of the Deadâ€ is still a trademark in horror cinema and will forever be etched in every fanboy’s heart.