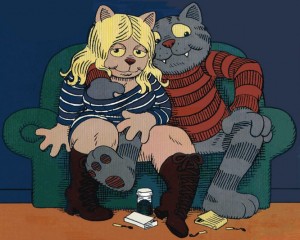 “Fritz the Cat” is an animated feature that could have only been made in the decadent seventies era of film.

Simply put, it is a film that will offend everyone looking for something to be offended about.

Because of this, it is an audacious and brilliant satire of the seventies and a film worth watching over 30 years later.

Everything in “Fritz the Cat” has a deeper meaning than you would expect, giving it a levity and social significance not found in many animated films, never mind an X-rated one.

For example, the cats oppress the crows, which is meant to deal with the racism many faced at that time. Early in the film, one cat asks a crow, “Why does James Earl Jones always have to play a black man?” making us wonder if “the cats” really understand what is going on with “the crows” at all.

Aside from from addressing the issue of race, Fritz tackles authority by portraying police officers as pigs. Today, a film would never be this bold on the issue of racism and authority. The funny thing is that “Fritz the Cat” deals with the issue better then the pointless exercise in futility known as “Crash,” despite being over 30 years old.

If it isn’t obvious already, this is a film that dares to be bold and in your face. This ability and the fact that it can still make you laugh through all of this is what makes this an admirable film. Films like this are what make the cinema sometimes a great adventure. However, as stated before, this is a film for open minded and smart adults.

The theme of Fritz is a bi-product of the film’s director, Ralph Bakshi, who was equally as provocative and interesting. Throughout his career, his films dealt with important issues of there time and were all animated. Starting out in the sixties with Spider-Man, Iron Man, and Captain America cartoons, Bakshi evolved into a Hollywood director. Aside from Fritz the Cat, Bakshi’s other great films include Fire and Ice, (Inspired by Conan the Barbarian) and Coonskin. However, Fritz served as many viewers’ introduction to his work.

To this day, “Fritz the Cat” remains a constant reminder of a time when movies didn’t try to cater to everyone or try to beat a message in by being overtly obvious. It makes you laugh, and also points out the flaws in society.

As a matter of fact, even if the message was removed from this film, it would still be a very funny film to watch.