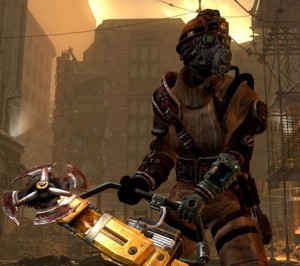 At times however, a series of bugs including, game freezing, and barriers permitting conversations to change and allow the story to progress hamper the gameplay. In spite of this, â€œThe Pittâ€ is still an enjoyable romp through future Pittsburgh and is worth your time if you are a fanatic of the series.

Unlike â€œOperation Anchorage,â€ which is covered in snow and blue skies, â€œThe Pittâ€ heavily resembles the capital wasteland, but in its own way. Gone are those pesky super mutants that seem to be all over the map in the original game in lieu of torgs, which are similar to the feral ghouls present in the capital wasteland, but are far quicker [mostly due to the fact that they walk on all fours] and in some cases, much more dangerous. Unlike the ghouls, who are rather slow and attack without hesitation, torgs seem to always be in packs of two or three, making them far more dangerous. Until you’ve gotten all your equipment and weaponry back, about halfway through the story, they can be a huge hindrance on your player’s health.

Speaking of your player’s health, things are a bit different this time around, as in this DLC, you’re undercover as a slave and are not treated as the vault dweller you were in the capital wasteland. After being brought to the Pitt by Wernher, a runaway slave, who resembles Kurt Russell in the John Carpenter classic â€œEscape from New York,â€ you’re given the rundown of events that lead into the DLC. He tells you of the injustices in the Pitt by a man named Ishmael Ashur, which consist of using people as slaves the same way the slavers, raiders and super mutants do in the capital wasteland, but in much larger numbers. It’s gotten to the point where Ashur controls the whole city and it’s up to you to either join Wernher’s cause, or help Ashur continue his demonic deeds.

Already, it’s obvious to see the similarities between the two story-arcs, but â€œThe Pitt,â€ manages to set itself apart by it’s look. Bethesda did an excellent job of creating an industrial hellhole for this DLC and has fully-furnished it with excellent sound effects to provide the gamer with a completely new and equally intriguing adventure.

Making things even better this time around is the fact that unlike â€œOperation Achorage,â€ players can return to the Pitt and finish whatever quests they haven’t already. Nonetheless, just like the first DLC for the game, it’s only about a four-hour adventure, making it difficult to justify going back as a tourist after all the quests are done, other than to give a child you save in the final quest teddy bears for cash and experience.

Unlike â€œOperation Anchorageâ€ however, the weapons and items found aren’t nearly as cool, despite the impressive Man-Eater, which is arguably the best melee weapon in the game when used in VATS mode. Simply put, after completing the Anchorage DLC and garnering all the goodies there, you’re pretty much set armor and weapon-wise, as the Winterized T-51b Power Armor never has to be repaired and the Gauss Rifle and Shocksword are an excellent one-two combo. Because of this, you may end up selling most of your plunder when you get out of the Pitt, making it an adventure primarily for the fun of it and experience, rather than to suit-up your character for the rest of the game. Because of this, casual Fallout 3 players may not enjoy this as much as they did Anchorage.

Overall, it’s hard to say which Fallout 3 DLC is better, as both have different styles of play and have their strong points. Players that purchase â€œThe Pittâ€ will enjoy the story though and will feel more at home with it than Anchorage.

However, this time around, they won’t have many toys to take back with them when the journey is complete.