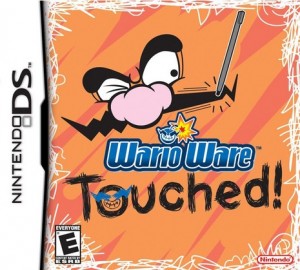 Warioware: Touched takes gamers on a wild and fast ride through 200 micro-games that stem from playing classic NES games to just simply picking your nose. While isnâ€™t going to win any game of the year awards, it doesnâ€™t try to. It simply gives fans of the series what it wants, which is a solid addition to the series that takes full advantage of the system itâ€™s on. Even though it’s a tad short, it doesnâ€™t disappoint its loyal fans.

For those who are unfamiliar with the Warioware series on the Game Boy Advance, it’s all about micro-games. Each level consists of many micro-games that get faster and increase in difficulty the farther you proceed. Considering how good you are, the game can get insanely fast at times. The only thing that separates Warioware: Touched with its predecessors on the Game Boy Advance and Gamecube is that this edition relies totally on the stylus and microphone for all gameplay control. Simply put, fans of â€œFeel the Magicâ€ on the DS will adore this game because it has more polish and deeper gameplay mechanics and is more fun to play.

The gameplay variation in Warioware: Touched however is the one element in this game that brings everything together. Players are asked to draw, rub, poke and slice objects with their stylus. In addition to all of this, one specific level forces you to simply use your microphone and scream or blow into it to make your character do what you wish. Seeing your character respond in such a fashion can create hours of fun, enticing gameplay that canâ€™t be found on any other system out there right now. Despite solid gameplay mechanics, the most entertaining elements of Warioware: Touched are its speed and its sound. First time players of the series may be unable to keep the stylus moving at such a
rapid speed in the beginning, but should be able to get used to the speed of the game after an hour or two.

As far as the sound in this game is concerned, no other game takes this much advantage of the built in surround sound of the DS better than Warioware:Touched. Every single level is accompanied by lush sound effects and music that capture the essence of each level perfectly. Eventually one plays the game so much that the songs became stuck in your head and from what Iâ€™ve seen from a few message boards on the Internet, they donâ€™t come out easily either.

The one drawback this game unfortunately suffers from is its length. Despite over eight levels consisting of over 200 micro-games, it only takes about 8 hours to complete. Once you finish the game however, you are able to unlock several other micro-games. These games consist of playing a piano, two player ping pong, using one DS and having a calculator. These micro-games add to the games already moderate playability and make up for the games short length.

Simply put, Warioware: Touched is a great example of what can be done with a system like the Nintendo DS. Even though the game is a tad on the short side, the game is so much fun that youâ€™ll find yourself playing the game a lot even if you have already beat it. Fans of previous Warioware titles will find another impressive title to add to their collection, while new DS owners who have never played the series will find something that is definitely worth their time.