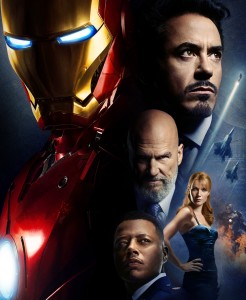 Itâ€™s not often when a movie based on a comic book turns out to be something truly special.

At first glance, a film like â€œIron Manâ€ looks to be a middling entry into the world of big screen comic-inspired drama. With a jaded star, playing a character that isnâ€™t particularly adored by youngsters or appreciated [currently] by older comic book fans, this film looked as if it needed everything going for it to be able to escape big screen mediocrity.

Powered by a tour-de-force performance by Robert Downey Jr., and an excellent supporting cast consisting of Terrance Howard, Jeff Bridges and Gwyneth Paltrow, â€œIron Manâ€ may be the best comic book-inspired film since â€œSpider-Man.â€

Some may even argue that itâ€™s the best of all-time.

Make no mistake about it, being able to do such a thing with a character such as this is a daunting task. Over the past four decades, Marvel comics have always had numerous problems keeping the franchise fresh. For children, Iron Man seems a bit too grown up, as his well-documented drinking problems and womanizing tendencies are often too much for them. Teenagers and older readers however, often appreciate his exploits, but tend to stop reading comics when they get to a certain age, thus making the character extremely under-appreciated in the super hero world.

However, this film goes beyond the comic book and builds the protagonist up in a way where he is more interesting than ever before. Rather than a full-fledged makeover the likes of Venom in â€œSpider-Man 3â€ or Halle Berryâ€™s horrid interpretation of Cat Woman, Downey is simply Tony Stark with the volume turned way up.

It is because of this that Downey turns in one of the best performances of his career, which will ultimately set the bar extremely high for future comic-inspired movies and later entries in the series. Never before has an actor been so at one with the character heâ€™s played than Downey Jr. is in â€œIron-Man.â€ Cocky, arrogant, yet charismatic and undeniably likable, Downey (â€œZodiac,â€ â€œCharlie Bartlettâ€) does a phenomenal job as Stark, the millionaire playboy with a heart. With Downey leading the way through an exceptionally-crafted story and even better special effects, â€œIron-Manâ€ is easily the first film this year to truly captivate audiences.

As a matter of fact, â€œIron-Manâ€ is such a solid entry into the world of cinema that non-comic fans will love it as well. Director Jon Favreau (Daredevil, The Break-Up] has put together an amazing story that not only gives every character an opportunity to shine in their own way, it leaves the door open for a sequel that will continue to flesh out what has been a remarkable first entry for the franchise.

While it appears more so everyday that Hollywood may have run out of ideas completely, if films like this keeping popping up once every few months, comic book geeks may have a bigger voice in Hollywood than ever before.