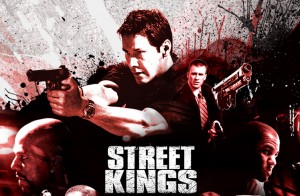 Every few years, there comes a film that is so bad that it simply makes you laugh. It could be a horrible story, bad casting or even unconvincing characters that end up making you chuckle, but in the end itâ€™s obvious. The movie isnâ€™t worth its weight in receptacle waste.

Directed by David Ayer, who ironically wrote the screenplays to satisfying romps like â€œTraining Day,â€ in 2001 and â€œDark Blue,â€ in 2002, â€œStreet Kings,â€ is a film that epitomizes the term â€œunwatchable.â€ Not only doesnâ€™t it feature a cast that must have been assembled in a drunken rush, the entire plot and its development seem to have been put together by someone heavily addicted to prescription drugs.

In the end, while the film tries itâ€™s hardest to emulate successful â€˜80s cop dramas starring Clint Eastwood and Charles Bronson, it feels more like a â€œMcBainâ€ short from â€œThe Simpsonâ€™s,â€ than a full-fleshed feature.

Usually, when you hear the names Keanu Reeves and Forest Whitaker, you think of something solid. Sure, theyâ€™ve had their stinkers like â€œHardball,â€ and â€œGhost Dog,â€ but for the most part, these guys turn in respectable performances. However, what ends up happening in this debacle is the complete opposite. Playing Detective Tom Ludlow, Reeves [Dracula, Speed] is your typical anti-hero cop who is trying to rid his department of corruption, most of which he is directly responsible for. His best friend, Captain Jack Wander, played by Whitaker, [Species, The Crying Game] is the head of Los Angeles Vice Squad and is the one responsible for most of the drama in the department. Aside from that, we find out so little about Ludlow that heâ€™s far from a convincing character, making the film feel like a woman at a really bad first date that doesnâ€™t know when to stop ordering food.

With that small snippet of the plot, itâ€™s obvious there is nothing new in â€œStreet Kings.â€ However, with sharp dialogue and good performances from the filmâ€™s two stars, this could have been watchable. Instead, Ayer has Whitaker use this accent that will remind many of Jackie Gleason in â€œThe Hustler.â€ However, the accent doesnâ€™t make Whitaker look like the tough guy Gleason was. Rather, he looks like a buffoon. It doesnâ€™t help matters either that the dialogue in â€œStreet Kingsâ€ should be compiled and used in a book entitled â€œHilarious Movie ClichÃ©s Volume 1,â€ as its lack of wit, charisma and passion are the exact opposite that youâ€™d want in a cop drama.

Knowing this, youâ€™d continue to sit in the theater hoping that Ayer didnâ€™t find a way to ruin the other performances of his actors. While he surprisingly doesnâ€™t have the rest of his cast walk around with afro wigs and drive unicycles, the casting director basically does the job for him. For some odd reason, Caster Mary Vernieu thought that Cedric â€œThe Entertainer,â€ Chris Evans, Jay Mohr and Terry Crews, four actors known better for appearing in comedic roles than anything serious, would be perfect choices for four of the biggest supporting roles in the film. While their performances arenâ€™t disgusting, theyâ€™re far from sexy. Overall, it feels as if the wrong parts were given to the wrong people and when itâ€™s all said a done, these actors canâ€™t be taken seriously in these roles. Considering how bad the script is in this film, the choices made before the film was filmed only exacerbates its problems..

With that being said, even those who pride themselves on being extreme action film aficionados should find something else to watch. Itâ€™s a bad film in every sense of the word and after the first few minutes, the laughs from Reevesâ€™ dialogue will eventually turn into laughs about everything else in the film.

“Street Kings” is a bad movie lover’s dream, an experiment in film that went horribly wrong. The film had so much in its favor that one couldn’t imagine it being anything other then a summer thrill ride. ThirtyÂ  five years ago, this film could have been a blast with Steve McQueen in the lead and Gene Hackman in the Forest Whitaker role. While one can dream for that cast, the film is actually entertaining despite a huge amount of flaws.

Directed by the king of mediocrity David Ayer, who wrote the overrated screenplay for “Training Day,” he makes a slightly better movie this time around with “Street Kings.â€ He directs some very strong action scenes here, but lacks any talent in directing his big name stars, who seem lost and out of place in this film.

Overall, “Street Kings”Â is a bizarre experience, but one that is easy to watch. The action is perfectly done, the performances range from campy to earnestÂ  and in the end you could do much worse then this film. (“Terminator Salvation” for example.)

About Patrick Hickey Jr. 12947 Articles
Patrick Hickey Jr. is the Founder, Editor-in-Chief, Master Jedi and Grand Pooh-bah of ReviewFix.com and is the author of the book, "The Minds Behind the Games: Interviews with Cult and Classic Video Game Developers," from leading academic and non-fiction publisher McFarland and Company. He is currently the Assistant Director of the Journalism Program at Kingsborough Community College and is a former News Editor at NBC Local Integrated Media and a National Video Games Writer at the late Examiner.com. He has also had articles and photos published in The New York Times, The New York Daily News, Complex and The Syracuse Post-Standard. Love him. Read him.