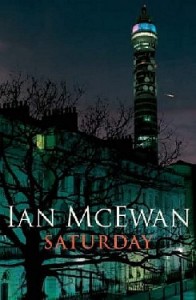 Henry Perowne is a man of habit.

On his day off as a neurosurgeon, he runs errands, plays racquet ball and visits his mother suffering with Dementia.

This schedule gives some semblance of order to Perowneâ€™s life in Ian McEwanâ€™s Saturday.

The novel begins just before the dawn of Perowneâ€™s routine.Â Itâ€™s a scene where the protagonist looks out his window, philosophizes about his life and does a mental check of all the things that need to be conquered on this day.Â His introspection is interrupted by a plane crash landing in the distance.

If this were a different sort of novel, then Perowne would be fighting some force or running towards the crash to investigate.Â Essentially some type of action would occur, but no.

The novel does have moments of suspense however.Â While driving through a rally, Perowne meets up with Baxter â€“ a man he expertly diagnoses with a rare brain disorder while simultaneously keeping him from stealing his car.

As a reader, you think to yourself â€œnow weâ€™re going to see some action.â€

While the incident with Baxter rattles Perowne, he still forces himself to continue his routine and get through his day.Â This incessant need to have his â€œSaturdayâ€ like any other is frustrating to the extent that when a racquet game becomes a long war campaign, instead of maintaining the routine of his day, you just stop caring.

At this point you begin to grasp at straws.

Maybe McEwan is using Perowne as a metaphor for someone, who like the rest of us, grapples with issues not of our creation and out of our control.Â He keeps dominion over what he can to have a semblance of normalcy.

McEwan is frustrating as an author, because there are pockets of moments in â€œSaturdayâ€ that keep your eyes riveted to the page.Â For instance, the language McEwan uses to narrate how Perowne operates makes you want the novel to be solely about brain tumors and rare neurological disorders.Â However, these moments are few and far between.Â Perowne is so isolated from experiences outside his family and profession that the reader is left with the inability to connect to any of the characters when intense, emotional scenes occur.

Reading Saturday makes one wonder if McEwan is afraid of seeing the lack of depth that is Henry Perowne reflected back at him.Â  Or perhaps this is the type of novel where the writer is working out his own stuff, while leaving the audience in the dark.

If thatâ€™s the case, then McEwan should keep his diary to himself.