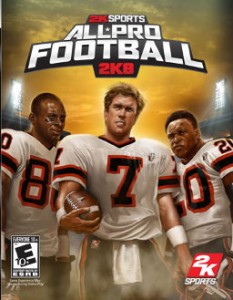 All-Pro Football can be found at both Gamestop and Best Buy for 10 bucks and even as low as five dollars on Amazon.

Throughout the early part of the millennium, gamers had their choice between two football games, Electronic Artsâ€™ John Madden and 2K Sportsâ€™ NFL 2K series. The two both had different strong points, as Madden had the better graphical engine and thrived on arcade-like gameplay, while 2K prided itself on gameplay and realism.

However for the past four and a half years, Madden has held the exclusive rights to the NFL license, forcing the boys at 2K to sit idly on the sidelines.

While the game will bring back memories of the great football games the development team put out years ago, itâ€™s lack of an NFL license and deeper gameplay options that ends up hurting the end package and limits its overall star power.

Despite not having the rights to any current NFL teams and players, the team at 2K managed to snag over 250 â€œLegendsâ€ of the gridiron, which consists of everyone from all-time greats like Barry Sanders and Johnny Unitas, to lesser known, but nonetheless accomplished NFL players like Henry Ellard, Freeman McNeil and Chris Doleman. There is also a solid create-a-player mode in the game as well, which will allow you to create anyone who isnâ€™t in the game or even put yourself in there to mingle with the legends of yesteryear.

Regardless of the number of legends in the game though, youâ€™ll often find yourself playing against a team that has the same players as you do. This is the first of several nagging issues that hold â€œAll-Pro Football 2K8â€ back from being as solid a game as it could have been.

When turning â€œAll-Pro Football 2K8â€ on for the first time, youâ€™re prompted to create your own team from scratch, picking everything from the teamâ€™s logo and uniform to the players on the team. This can be a fun experience, but the fact that you can only pick about half your team [the rest is filled with random made-up players] takes some of the enjoyment out of this process.

Given this fact, depending on how you create your team, you may find a huge part of your team consist of players that have never existed. So say that you choose John Elway or Joe Montana as your starting quarterback, the chances that youâ€™ll be able to have the same caliber running back to hand off to or wide receiver or tight end to pass to is highly doubtful if you want to put a quality team on the field.

However, despite the rigid team creation options, the game features online leagues and a one-year franchise mode that adds to the overall playability. Playing â€œAll-Pro Football 2K8â€ online is probably the best reason to buy the game, as squaring off against people with other customized teams with their own unique strengths and weaknesses is extremely enjoyable.

Another strong point of the game is its realism. The passing game is as solid as ever and fans of the running game and the older games in the series will feel that All-Pro Football 2K8â€™s rushing engine is perhaps the best in gaming today. Defense is also a ton of fun to play, as the new gang-tackling system makes it easier to keep opposing offenses in check and mirrors the same tackling thatâ€™s done in the pros.

Nonetheless, despite the gameâ€™s realism, the graphical engine more than shows its age, as it looks more like a PS2 game on steroids, rather than a true next-generation football title. The animations are solid, but lack the polish and detail that even Madden 06 for the X-Box 360 has. This one factor may spoil the fun for plenty of gamers.

Putting all the games shortcomings aside however, â€œAll-Pro Football 2K8â€ is an entirely different football experience from Madden that is worth at least a rental. Itâ€™s fun to play online and with a bunch of friends and will easily provide the hardcore football fan with a solid look back at the greats of their childhoodâ€¦ and yeah, O.J. Simpson.