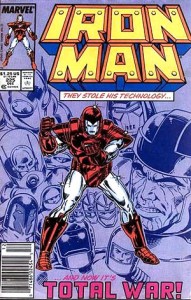 The late ’80s were a great time to be fan of â€œIron Manâ€ â€“ it was a time when Tony Stark and his armored alter ego were fleshed out beyond the realm of fighting one villain after another. It also introduced a change in his appearance with the striking red and white Silver Centurion armor.

In â€œArmor Wars,â€ Stark discovers that his Iron Man armor technology has been stolen and was sold to other armor-wearing villains by his business arch rival, Justin Hammer. While Iron Manâ€™s real world identity is not blown and most of these villains donâ€™t even know they have Iron Man tech upgrades, Stark goes berserk at the prospect of having his technology used to kill innocents.

The book itself is a collection of â€œIron Manâ€ issues #225-232, written by David Michelinie. The tale moves easily along with an even mix of storyline and action. Michelinie also doesnâ€™t bog you down with too much mythos and someone with just a little familiarity with Iron Man can follow the story easily.

The art, save for the last issue, is by â€œIron Manâ€ artist Bob Layton. The series is well illustrated and is top notch as far as this era in comics goes. Barry Windsor-Smith is the artist for wonderfully illustrated last issue.
Our story follows Iron Man as he systematically trashes various armor wearing villains using Stark tech in their suits. He starts out with two bit foes like Stilt Man and the Controller, but eventually has to take on allies like the Guardsmen and the Mandroids to ensure that Stark technology wonâ€™t fall into the wrong hands.
Stark publicly fires Iron Man to avoid the bad press his vendetta is causing Stark Enterprises and from being sued by some of the super villains his alter-ego thrashed.

However, the Armor War slowly takes its toll on Stark and you can feel the tension build with every issue. He even goes head to head with his long time friend Captain America, foreshadowing the events of Marvelâ€™s â€œCivil Warâ€ by 20 years.

Iron Man even dons his nifty black stealth armor, flies to the Soviet Union and goes up against the strongest of his armored foes: Titanium Man and Crimson Dynamo. This event results in the accidental death of one of his foes and his removal from the Avengers.

â€œIron Manâ€ meets his match when he faces Firepower, designed by Edwin Macord, a former Stark rival and backed by government funding. Firepower is impervious to the negator packs Iron Man used to disable his previous foes and easily bests Iron Man.

Soon after, the world believes Iron Man is dead and Stark goes about just being an industrialist. Macord sends firepower to attack Stark factories and affiliates out of revenge and tells stark to close up shop. Not standing for it, Stark builds a new Iron Man armor resembling the classic armor of the â€˜60s.

Using data from their last encounter, Iron Man showcases his new armor and has a rematch with Firepower. This heralded in the classic Iron Man of the early â€˜90s.

â€œArmor Warsâ€ is possibly the best Iron Man saga ever. Itâ€™s easy to follow; action packed and leaves the reader satisfied as a result. It led to another four years of excellent stories lines before the confusing nonsensical plots of the mid to late â€˜90s.

Simply put, this is vintage Iron Man. It’s fun, mature and isnâ€™t weighed down by politics, making it a must have.

So suit up true believers and ride shot gun with the Invincible â€œIron Man.â€