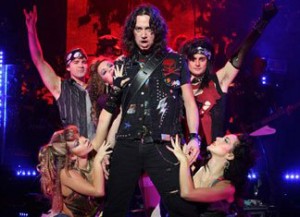 It was a time when a bald-headed musician like Chris Daughtry wouldn’t have stood a chance in the industry.

In the 80s, it was all about huge, gravity defying hair and equally as monstrous guitar solos, mixed in with beautiful women on top of sports cars.

It didn’t matter if your clothes didn’t match or if you weren’t able to dance- it was all about the rock.

Despite being 20 years later and seeing that many of the stars of that time have had their presence dimmed, including the infamous White Snake chick, Tawny Kitaen, who is better known now for beating her former Major League pitching ex-husband Chuck Finley, than any music video she’s ever appeared in, the decade will always be a fun one, filled with pop culture references and jokes that will always resonate in our hearts.

â€œRock of Ages,â€ the musical currently shredding and wailing at the Brooks Atkinson Theatre in Manhattan, is a fine example of those times, serving as a reminder of what music could be when the idea of selling out seemed like an impossibility and dreams of super-stardom could be achieved by simply being yourself.

On paper, â€œRock of Ages,â€ doesn’t seem too enticing, as it appears to be another play that hopes to make a buck off of an amazing soundtrack- this one headed by the likes of 80s powerhouses such as Styxx, Poison, Journey, Survivor, Foreigner and countless other songs that everyone, including your grand mother, knows the words to. However, while having a soundtrack like this instantly increases the amount of fun the audience has during the show [which is exacerbated even further by the staff at the theatre giving out free LED lights in the shape of lighters before the show so the fans can show their appreciation during power ballads], the production needed a decent script to truly shine above the mediocre.

Based on Chris Dâ€™Arienzo’s book and directed by Kristin Hanggi, who makes her Broadway directorial debut, â€œRock of Agesâ€ tells a rags to semi-riches, back to rags story of Drew, played by Constantine Maroulis [American Idol, Wedding Singer] and Sherrie [obviously named after the mega ballad by Journey], played by Amy Spanger.

At first, it feels as if the shaggy-haired and quirky Maroulis is out of his league in this performance, as his acting seems more suited for a small reoccurring part on â€œThe Office,â€ but in time, he grows on you and shakes away the cobwebs. He’s also aided by his amazing singing voice, which is essentially the reason why he was cast for the role in the first place. On that alone, he thrives in the lead role and provides a few laughs in the process, giving him more than enough depth as the leading man in a Broadway comedy.

The same thing goes for Spanger, who, despite lacking the physical assets of some of the smaller players in the performance, nails the sexy girl next store role and simply rocks with a booming vocal performance. Together with a slew of excellent performances by the supporting cast, mainly Mitchell Jarvis, as the narrator and resident knucklehead Lonny, and Wesley Taylor as Franz, â€œRock of Agesâ€ has the polish that is anything but the work of generic and stale power chords.

This feat of possessing an upbeat and talented cast, combined with the instant credibility of having the soundtrack â€œRock of Agesâ€ has, make it a must see for anyone looking for a fun and entertaining night out or any theater buff looking for something different.

Sure, it may feel more like a concert than a musical at times, but what’s wrong with that?

Nothing, nothing at all.