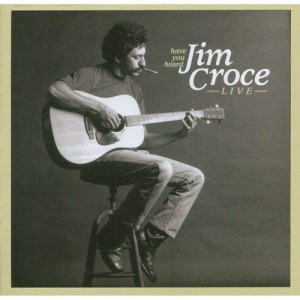 The â€œday the music diedâ€ will forever be known as that winter day on February 3, 1959 when Buddy Holly, a teenage Ritchie Valens and J.P. Richardson (the Big Bopper) died in a plane crash in Iowa . Other notable losses to the music industry in similar tragic fashion were soul pioneer Otis Redding at the age of 26 on December 10th 1967 and blues guitarist extraordinaire Stevie Ray Vaughn on August 27, 1990 at the age of 35. All of the aforementioned artists left an indelible mark on the rock world that will never be equaled or forgotten. Who knows what greater musical heights these phenomenal talents would have reached.

But alas, it was not meant to be. At least we have their wonderful discographies to hold onto, listen to and cherish.

Jim Croceâ€™s death on September 20 1973, at age 30, in a plane crash along with his musical collaborator Maury Muehleisen (second guitar and backing vocals. As a matter of fact, he was often referred to as Jim’s â€œOne-Man Band) was one of the days that music died in the hearts of many others. Croce was a balladeer, poet, social critic and hopeless romantic whose career was just starting to take off when tragedy struck.

Born in South Philadelphia, Croce started out as part of a folk duo with his wife, Ingrid, playing coffee houses and colleges. They even released an album titled â€œJim and Ingrid Croce.â€ When that release went nowhere, Croce ditched the music business and started working as a truck driver and in construction. Though this might have seemed like a depressing dead end at the time, it served as a serendipitous stroke of luck for him. Observing his co-workers and other assorted characters and miscreants, he came into contact with and used these experiences to create material for his â€œslice of lifeâ€ songs along with the musically talented Muehleisen. These mini-movies introduced us to people like â€œBad, Bad Leroy Brown,â€ the â€œRoller Derby Queen,â€ the man who you donâ€™t mess around with, Jim and â€œRapid Royâ€ (The Stock Car Boy). We also heard about â€œThe Working at the Car Wash Bluesâ€ and a man yearning for his lost love, who was stolen away by his best friend, while he asks an â€œOperatorâ€ for help in placing a call to her.

â€œPhotographs and Memoriesâ€, which is extremely poignant, considering his fate, is one of the finest and most heart-wrenching ballads ever written. Even for such a short career, Croce had a song for every situation we might encounter in our romantic lives, on a job, or in a seedy bar. Have you ever lived somewhere and not felt at ease? Well, Jim wrote â€œNew York â€™s Not My Homeâ€ just for you.

His multi-textured guitar work, warm vocals and harmonies with Muehleisen send chills down the spine and his everyman approach to songwriting resonated over thirty years ago and still does today. â€œTime in a Bottle,â€ frequently used as a wedding song and â€œI Got A Nameâ€ became major hits posthumously for Croce. In spite of hi major hits however, there are many lesser known tracks that are favorites with hardcore fans and newcomers alike, such as â€œLovers Cross.â€

To this day, he remains one of the most underrated and under-appreciated figures in rock history.

Why are one of a kind talents like Jim Croce taken away from us too soon? This is a question that will be ponderedÂ  for generations to come. Pick up a Croce CD or watch the â€œHave You Heardâ€- Jim Croce live DVD and be prepared to be transported to a sonic world of eccentrics and star-crossed lovers.

Despite his untimely death, Croce’s musical legacy will live on and his star will continue to burn bright.

On a personal note, the older I get, the more I appreciate his songwriting genius and melodic guitar work.

Now only if we could save time in a bottleâ€¦