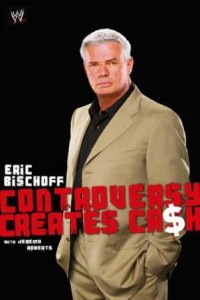 Regardless of your affinity for the wrestling industry, it was pretty hard not to notice the explosion the industry was going through almost a decade ago that created legions of hardcore fans that still watch to this day. One of the main reasons for that explosion was Eric Bischoff, who turned WCW from a washed-up regional promotion into a multi-million dollar company and forced the WWE to shake things up.

His new book, â€œControversy Creates Cash,â€ co-written with Jeremy Roberts, while being an immensely enjoyable read for any wrestling fan, fails to really bring out many of the juicy details of the Monday Night Wars that havenâ€™t already mentioned in numerous WWE documentaries over the years and is riddled with numerous typos that take away some of the books brightness and charm. Despite that, itâ€™s still a worthwhile read for any wrestling fan.

Chronicling the life and career of Bischoff, â€œControversy Creates Cashâ€ tells the story of a kid from a low income family in Detroit who eventually became the only man to ever beat Vince McMahon at his own game, battling everyone and everything in his way in an attempt to stay on top, only to lose and be hired by his competition a few years later.

Considering the fact that all the books that have written about the wrestling industry during this time period have been written by outsiders, â€œControversy Creates Cashâ€ gives the reader Bischoffâ€™s unique interpretation that was unavailable previously.

Due to its conversationalistâ€™s tone, the entire book feels like youâ€™re having a one on one conversation with Bischoff. Hearing stories about his early days as an amateur wrestler in high school to his early days in the AWA are a pleasure to read and shed some light on a person that has been blasted so many times on the Internet during his professional career, that it was impossible to separate him from his persona he played on TV, before the writing of this book.

As a matter of fact, throughout the course of the book, Bischoff manages to put an end to many of the rumors started about him on the Internet over the years, resulting in a few instances of wit and sarcasm that really help the book shine. Despite that, once Bischoff finishes talking about his pre-WCW days, the book becomes something much different.

While reading Bischoffâ€™s explanations as to why he fired wrestlers like Steve Austin, the Honky Tonk Man and Sean Waltman are extremely entertaining; you get the feeling that Bischoff is pulling his punches a little bit. Instances of this can be seen when he discusses the personal problems of Kevin Nash and Scott Hall. For some reason, Bischoff fails to go into enough detail about them to really entice the reader, making it all a big tease. The same thing goes for the infamous Sid Vicious – Arn Anderson scissor fight, which is mentioned, but is never discussed in the detail that could have made the book a cult classic.

As well, Bischoff never tells the reader how controversy creates cash. Instead, he spends dozens of pages talking about how inner-office politics killed WCW and how they wouldnâ€™t let him be controversial, making the reader confused as to why the book was named what it was.

In addition, various typos in the last section of the book, take away much of the shine and polish off an otherwise decently-written book. Things like referring to the Steiner Brothers as the Stemer Brothers and the Sterner Brothers within the space of three paragraphs and various obvious sentence fragments take credibility away from the story.

Doing everything from competing in karate tournaments all over the world to being a male model, Bischoffâ€™s life mirrors Tom Hanksâ€™s in â€œForrest Gump.â€

Considering that, hearing how he became the king of the professional wrestling industry after being a salesman in the AWA and a third-string announcer in WCW is an intriguing tale of perseverance, hard work and luck that every fan of the squared circle should give a chance.