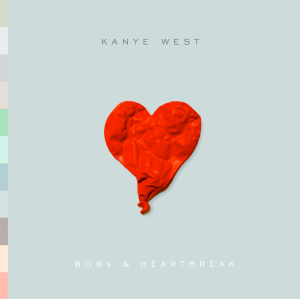 The only thing more difficult than listening to “808s and Heartbreak” is admitting that itâ€™s scarcely one of Kanye Westâ€™s better records. His reach for mainstream martyrdom is misguided, but itâ€™s hard to hate him for it: When he spazed out at the American Music Awards and compared himself to Elvis and the Beatles, he tried to negate the pain of being overlooked and underrated throughout his career.

Feeling his hip-hop roots were holding him back, he transformed into a techno troubadour who begs for affection with heartaches and sighs, but something about his new album seems shortchanged â€“ the whole thing feels like a romantic dinner at White Castle.

To be sure, heâ€™s got a right to sing the blues. On top of the widely reported death of his mother, heâ€™s also haunted by the fact that his fiancÃ©e left him some time ago. Even worse, Kanyeâ€™s so desperate to fill the void that he loses himself in strange experiments, the way somebody in a mental institution will pass the time weaving baskets. Putting digital dirges together for a record like this mightâ€™ve worked, but it seems like heâ€™s more focused on breaking new ground than sharing his soul â€“ he loves his new vocoder so much that he spends all 3 Â½ minutes of â€œHeartlessâ€ showing you how it works.

In fact, Kanye makes room for a vocoder on pretty much every song here, even the good ones. Although â€œLove Lockdownâ€ is an acquired taste, its mystery justifies its status as a top 10 hit. Heâ€™s on the right track to a stirring experience when he moans on â€œParanoid,â€ but itâ€™s the drum machine and synthesizer that actually get him there. â€œSay You Willâ€ is the strongest song on the record: In fact, itâ€™s one of the best heâ€™s ever done, even though it wins by default here. The rest is as dumb as it is dark.

Everything pretty much sounds the same here, as if Kanye looked up â€œsadâ€ in a thesaurus and wrote a song for every synonym: â€œWelcome to Heartbreakâ€ is â€œdistressing,â€ â€œStreet Lightsâ€ is â€œfunereal,â€ â€œPinocchio Storyâ€ is â€œmirthless.â€ He mightâ€™ve thought there was art to be found in all that agony and darkness, but he learns the hard way that when you stare at the abyss, the abyss simply stares back at you.

A little bit of rapping mightâ€™ve helped, though. Pop music has its own reward, but not when itâ€™s done by a rapper who only wants to blend in to impress you. In the end, he never finds the key to crossover immortality: Thereâ€™s no â€œHound Dogâ€ here, no â€œMaggieâ€™s Farm,â€ no â€œNorwegian Wood,â€ no â€œBeat It,â€ no nothing. Even worse, in the process of trying to turn into Elvis, he forgot how to be Kanye.

Come to think of it, Lauryn Hill had the same problem a couple of years ago, when she dumped her R&B image and became a Joan Baez clone. She put together a double album from an “Unplugged” concert on MTV, with about two hours of the most boring material sheâ€™d ever written. A funny thing happened, though, when a certain college dropout tinkered with one of the tracks and made it his own: â€œMystery of Iniquityâ€ was a bad song, but Kanye liberated the good song that was hiding in it when he used it as a beat for â€œAll Falls Down.â€ (Syleena Johnson sings on Kanyeâ€™s version, by the way, not Lauryn Hill.) Most of “808s and Heartbreak” is tangled up in its own obscurity, but itâ€™s possible that good songs can be found in itâ€¦somewhere.

Review Fix chats with Darrin West, Co-Founder of Iocane Games, who discusses the development, creative process and goals for his...