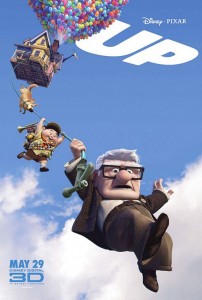 Itâ€™s kind of funny that Disney and Pixar chose to release â€œUpâ€ in 3-D, since the whole point of showing movies that way is to bring them closer to reality. The beauty of films like this one is that theyâ€™re not afraid to be imaginative â€“ â€œUpâ€ is a movie that knows itâ€™s miles away from reality, which gives it the freedom it needs to explore its own universe. Most theaters donâ€™t have 3-D projectors anyway and in that light, thereâ€™s no reason that you should find one that does. When it comes to films as fantastic as this one, two dimensions are enough.

That kind of praise is not unusual for Disney and Pixar films, but that shouldnâ€™t suggest that â€œUpâ€ rests on the laurels of its makers. Actually, it takes a risk by exploring new territory â€“ this is the only movie that theyâ€™ve ever done where the characters are normal people and even though itâ€™s hard to approach the mundane at an interesting angle, â€œUpâ€ sticks ordinary people into extraordinary situations, ones that provide them with all of the adventure they could ever want. Everything they do seems silly and unlikely, but thatâ€™s probably why it works.

Its hero, Carl Fredricksen (voiced by Edward Asner), might seem like an old curmudgeon in the advertisements, but he has more character than the commercials give him credit for. Heâ€™s a romantic with fond memories of his late wife, Ellie: He still has a bottle cap that Ellie gave him when they were kids, and keeps it fastened to the lapel of his tweed jacket with a safety pin. They always wanted to run off to Venezuela and have an adventure â€“ Carlâ€™s still sorry that he never got the chance to take her there. When the city tries to kick him out of his home and tear it down for land development, both Carl and his house escape with the help of a bunch of helium balloons, which lift it off of its foundation and up into the sky.

Although he leaves the city behind, he isnâ€™t alone up there â€“ an 8-year-old stowaway named Russell (voiced by Jordan Nagai) reveals himself and tells Carl that he wanted to earn a badge for helping the elderly, the only one still missing from his Wilderness Explorer sash. Russell says that he can help him navigate his journey, but Carl doesnâ€™t seem very grateful to have him around. Carl and Russell eventually find themselves in Venezuela, where they take the house closer to earth for a better look.

Russell meets an exotic bird and decides to call it Kevin, and later befriends a dog who introduces himself as Dug (voiced by Bob Peterson). He explains that heâ€™s able to talk with the help of a special collar, which was given to him by an explorer named Charles Muntz (voiced by Christopher Plummer). Even though Charles says he has seen lots of interesting stuff through the years, itâ€™s safe to say that he never saw a house being carried by a bunch of balloons.

On top of being imaginative, â€œUpâ€ also knows how to be funny. It gets a laugh whenever it has the chance to pull one off and it uses them in a way that makes the story more credible. When itâ€™s discovered that Charles gave talking collars to all of his dogs, it makes you wonder why heâ€™d go through the trouble of giving them different voices. The movie understands that this is kind of silly, and it calls attention to how bizarre these collars are â€“ when Russell makes the mistake of touching the dial Dug has on his, he canâ€™t believe it when the dog starts talking in different languages, but Dug kindly informs him that his collar isnâ€™t a toy: â€œHey, would you â€“ (Spanish) â€“ I use that collar â€“ (Japanese) â€“ to talk with. I would be happy if you stop!â€

These scenes work so well that they rise above the filmâ€™s shortcomings, like the way it sets itself up for moments that are kind of predictable. When Russell regards the space on his sash where his last badge should be, not only is it a safe bet that heâ€™ll get it in the end, but itâ€™s no coincidence that the space is roughly the size of a bottle cap, one that a certain septuagenarian keeps pinned to his lapel.

â€œUpâ€ can be forgiven for its occasional missteps, though.

When youâ€™re dealing with a film about characters who drift aimlessly through the sky, all you can do is throw away your compass and just enjoy the ride.