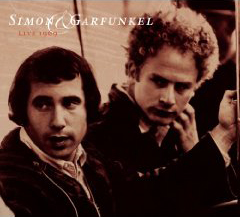 Paul Simon was recently on the Yes networkâ€™s â€œCenterstage,â€ talking about the reasons behind the dissolution of his musical partnership with Art Garfunkel in 1970. He claimed that Garfunkelâ€™s fledgling movie career (â€œCatch-22â€ and â€œCarnal Knowledgeâ€) was getting in the way of their â€œsymbioticâ€ musical relationship. Sadly, whatever the true impetus for the duoâ€™s parting was, the music world lost a team whose lilting and sonorous folk-rock harmonies captivated us all.

Before their ultimate parting of ways, Simon and Garfunkel had planned to record a live album of their November 1969 concert tour. It was to be released on the heels of their â€œBridge Over Troubled Waterâ€ masterpiece, which saw the light of day on January 21, 1970. The live album never came to be because the pair was in the final months of their musical collaboration. Well, I am happy to inform you that Simon and Garfunkel Live 1969, a new CD celebrating the 40thÂ  anniversary of â€œBridge Over Troubled Waterâ€ has been gift wrapped for those fans who never wanted the pair to break up and newcomers to their timeless music.

The selections appearing on Simon and Garfunkel Live 1969 (Columbia) are taken from performances at Carnegie Hall, the Long Beach Arena, Carbondale Illinois, Toledo, Detroit and St. Louis. It is a career-spanning retrospective of sorts that features songs from the early stages of their musical output (â€œLeaves That Are Greenâ€ and â€œthe Sound of Silenceâ€) to tracks from their last effort (â€œSong For the Askingâ€ and Bridge Over Troubled Waterâ€), though they didnâ€™t know it at the time.

Simon and Garfunkel reproduce their studio sound perfectly on the CD with the help of veteran musicians Hal Blaine(drums), Larry Knetchel (keyboards) and Joe Osborn( bass), who were known as the Wrecking Crew for their legendary studio work with the Monkees and Beach Boys, just to name a couple. Expert country picker Fred Carter (guitar), rounds out the list.

What is interesting to note is that these aforementioned musical stalwarts played on the â€œ Bridgeâ€ recording sessions. In fact, on the version of â€œBridge Over Troubled Waterâ€ that Garfunkel sings on this offering, Knetchelâ€™s rousing gospel-tinged playing complements his heavenly vocals perfectly. The only complaint I would have about the CD is that the backing band is a little too busy on the duoâ€™s rendering of â€œMrs. Robinsonâ€ from 1967â€™s â€œThe Graduate,â€ which starred Dustin Hoffman, Katherine Ross and Anne Bancroft.

Inspired by the Everly Brothers at a young age, Simon and Garfunkel, both Queens natives, recorded â€œHey Little Schoolgirlâ€ at the age of 16 in 1957.Â  It never became a huge hit, but did make the charts. They were billed as â€œTom and Jerry,â€ but who knew what greater musical heights would follow in the next decade for these schoolmates.

The release of 1964â€™s â€œWednesday Morning 3 A.M.â€ with Simonâ€™s guitar serving as the only backing instrument wasnâ€™t a major success. Simon later had a demo of â€œThe Sound of Silenceâ€ which record producers decided needed something extra. They added Bob Dylanâ€™s backing bandâ€™s electric instruments to the track and it became a hit in the beginning of 1966. Along with Dylan, The Byrds and The Lovinâ€™ Spoonful, Simon and Garfunkel were folk rock hit makers. A string of future classics followed: â€œI am a Rock,â€ Homeward Bound,â€Scarborough Fair/Canticleâ€ and â€œOld Friends / Bookends Themeâ€- all performed exquisitely on this new release.

Accompanied by their backing band or as a duo with only Simonâ€™s uniquely honed acoustic playing, Simon and Garfunkel give us live versions that are equal to or surpass their studio work. Along with well known favorites, the CD features lesser known gems like â€œWhy Donâ€™t You Write Me,â€ â€œSo Long Frank Lloyd Wrightâ€ ( an ode to the famous architect) and â€œThat Silver Haired Daddy Of Mineâ€ (a Gene Autry song that was covered by their idols the Everly Brothers).

Listening to this new/old release reinforces a point many Simon and Garfunkel fans have always felt,why did they ever break up in the first place?

Like the Beatles, who also broke up in September 1970, it proves the old adage that the sum of the parts is better than the individual.