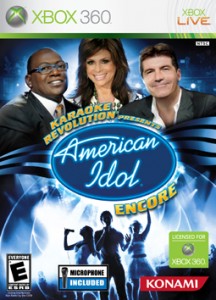 Before games such as Rock Band and Singstar hit the market, a series like Karaoke Revolution was easily considered one of the leaders in the Rhythm games genre. Despite using cover versions of every song featured in their games, the technology was innovative and fun, making for a fantastic gameplay experience. However, over time, much the same way the Guitar Hero series has shown signs of wear, Karaoke Revolution has become an obsolete franchise, appreciated only by cult fans who appreciate it for what it is: a solid party game that does what it’s supposed to.

While adding the American Idol license and a bunch of new gameplay modes adds more luster to this version of the game, KR: American Idol Encore is still light years behind the type of things being done in Rock Band, Guitar Hero 4 and Rock Band 2.

However, that doesn’t mean some fun can’t be had with this title.

Unfortunately, it’s hefty $69.99 price tag [with a microphone included] and lack of new content may scare off anyone new to the series.

Anyone already familiar with the series will be at home very quickly, as the control scheme and menu layouts are identical to the game released on the PS2 in early 2007 with the same name. As a matter of fact, other than the appearance of Paula Abdul in this version of the game, it’s virtually identical to it’s PS2 counterpart. For this reason, some hardcore fans of the series who were expecting something new may be disappointed, while others will find it that much easier to just jump into the game and start singing.

By matching the pitch of your voice to the vocal track in the game, Karaoke Revolution: American Idol can assess how well you are singing. Some gamers will even make the argument that by playing the game on a regular basis, you’ll also become a better vocalist. While that claim may hold some water, especially considering the multitude of different tracks available in the game and for download, the title ultimately caters to gamers that have some sort of vocal proficiency.

Gamers with no talent on the microphone will still be able to have a great time with it, as various gameplay modes make it ideal in a party atmosphere, but only those with golden tonsils will truly get the most out of it.

Despite the game’s ability to cater to a wide variety of players, it will be hard for most to shake the feeling that Karaoke Revolution Presents: American Idol Encore was more of an attempt by Konami to make money off of a uber-successful license, rather than to create a solid game.

However, the new additions to the time-tested formula, such as the addition of online play and downloadable songs add more replay value to a game already chock-full of unlockables and modes of play. For that reason, this version of KR is perhaps the deepest Karaoke game ever released on a console. Like the other games in the series, its a blast in parties and has enough content to keep any aspiring howler busy for hours on end.

That doesn’t mean it will enthrall you though.

Most of the content in the game has been recycled from older games in the series and the majority of the song downloads too have appeared on other games in the series. Because of that, it’s extremely hard to recommend this title to fans of the series that may own some of the older KR games. There are 28 achievements to unlock in the game that many fans of the series may enjoy playing through, but again, it’s hard to justify paying for a game that doesn’t bring anything new to the table.

For fans of the series that never got around to buying the game on other platforms however, this â€œcompilationâ€ may not be as fun as Rock Band, but it does get the job done.