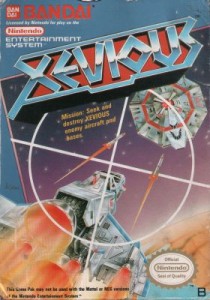 Originally released in 1982, Xevious is one of the first vertical shooters in video game history. Released on a plethora of consoles over the past 20 years like Nintendo, Game Boy Advance and Sony PlayStation, it was only a matter of time before the game was released on the X-Box Live Arcade. However, unlike the myriad of other ports of the game available, this version of Xevious is one that every hardcore shooter fan or retro-game enthusiast should give a whirl.

Unlike other versions of the game, the 360 Live Arcade port of Xevious has online leaderboards and achievements, which give it more replay value than it ever had before. Those looking for a game with easy achievements should look elsewhere, though, as some of them (the 100,000 point achievement immediately comes to mind) are extremely tough and will take hours to complete. Avid gamers, however, will find the challenge something to work towards and will quickly find themselves addicted to the game.

Aside from the achievements and online leaderboards, Xevious, at its heart, is an extremely challenging shooter that has played an influential role in the continuing development of the genre as a whole. However, while the game’s roots have played a part in video game history and that alone make it a game worth giving a whirl, it’s hard to deny that the game is still a fun romp. As a matter of fact, it’s one of those games that have an air of brevity that doesn’t seem to change over time. In the end, the game’s graphics may be dated and the control isn’t as sharp as Namco’s future shooting titles, such Galaga and Galaxian, but that doesn’t take any of the fun away.

That crudeness may be the biggest reason why the game is still so enjoyable. Compared to some of the pervious shooters mentioned, Xevious’ simple shooting mechanics (one double shooting cannon and an ability to drop bombs, all controlled by the the A and B button) and swift enemies make the game a true test for shooter fans. Unlike the colorful enemies in Galaxian and speedy gameplay of Galaga, Xevious’ engine at it’s core is much more methodical, forcing the player to bide his time and rely more heavily on defense and positioning than speed and offense. At times, you’ll find so many enemies on the screen that you’ll often be looking for a place to avoid fire, rather than a quick way to destroy everything on the screen. Simply put, most of the time, it’s just not possible, as your ship lacks the speed and firepower to get the job done at times. For that reason, Xevious is a different brand of shooter and one that is able to stand the test of time.

The game’s intense challenge also plays as a part in this as well. Over 25 years after its initial release, Xevious is still ambitious enough to drive novice gamers crazy. The game also has plenty of secrets that are necessary to find in order to get a great score, such as finding Sol Citadels and Special Flags, which are items hidden under the ground, only uncovered by dropping bombs. Finding these items will push veteran gamers to play the game even more, as they are difficult to discover, even with a well-written walkthrough.

With a host of already competent shooters on the 360 Live Arcade, some gamers may feel a little reluctant to give Xevious a chance. Regardless of its nostalgic roots, it’s an easy game to pass up as well, considering a recently released game like Ikaruga, which is both tougher and much better looking. Nevertheless, Xevious is a classic old-school shooter that is a must-own for anyone looking for a challenge. Any serious collector should also consider the download, as it is the deepest and most gratifying port of the game ever released.

Album Review: Michi: Where Your Heart is: A Poet With a Six-String

Artists like Michiko Egger are rare. Perhaps once in a long while- a decade, a generation, something like that. A...