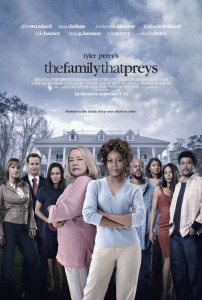 Tyler Perryâ€™s “The Family That Preys” has a great deal of respect for its characters and, by extension, its audience. Ticket buyers expect a drama to develop characters with believable desires and relationships: Perry likes to make films about ordinary people who hurt, comfort and collide with each other simply by going about their business. When they work with (or against) each other, the story unfolds from their time together.

Perry believes in his characters and trusts them to make the drama happen. They all come together, each with his or her own narrative thread, and end up with a colorful tapestry woven with faith, lies and secrets. He makes it work, but itâ€™s more difficult than it looks â€“ characters in lesser movies distract audiences with storylines that cross too many times and get tangled up. Perryâ€™s film is smart enough not to outsmart itself.

The film is also thoughtful enough that it doesnâ€™t stick its characters with moments they canâ€™t handle. Some dramas develop so many characters that a great deal of them have nothing to do. You can tell when the main characters get squeezed into scenes with peripheral ones â€“ the former have a shouting match while the latter hang around and stare. This movie, on the other hand, has all the drama it needs.

It wonâ€™t be easy to talk about the story here: In a movie with as many people and relationships as this one has, itâ€™s hard to know where to begin. Let us say that the fulcrum is the longtime friendship between Alice (Alfre Woodard) and Charlotte (Kathy Bates), the matriarchs of two clans that develop a secret bond. Aliceâ€™s daughter, Andrea (Sanaa Lathan), works for Charlotteâ€™s million-dollar corporation â€“ Andrea ends up having an affair with her boss, and Charlotteâ€™s son, William (Cole Hauser). Theyâ€™re each in marital relationships with loving people that neither of them deserve; Chris (Rockmond Dunbar) is foolishly oblivious to Andreaâ€™s affair, while Jillian (Kadee Strickland) is more suspicious of William.

Knowing her son cares nothing about the people in his life, Charlotte hires a businesswoman named Abby (Robin Givens) as the business COO to protect her position from him. She has a right to keep an eye on him â€“ William will do anything (and wound anyone) to take Charlotteâ€™s power away from her. In that light, it might not be a good idea for Chris to request a loan from him (his wifeâ€™s adulterer, youâ€™ll remember) to begin his own business with a friend named Ben (Perry).

All of this is entertaining enough to hold down a length of 111 minutes, but the characters are what sell it. They earn our feelings for them, favorable or not: Andrea and William might be dirt bags, but even they manage a shaky kind of redemption in the end. What they do in the meantime keeps the audience hoping for any one of their victims to slap either of them in the face. One of them does.

There is also a storyline that follows Alice and Charlotte going on the road in an old convertible. Those scenes are a little odd, but even they have a kind of truthfulness that gives the story its wisdom. Without them, the stories involving all the other characters mightâ€™ve been resolved without them learning an inspirational lesson, and Perry respects his characters too much to let that happen. Thatâ€™s how he feels about his audience, too.