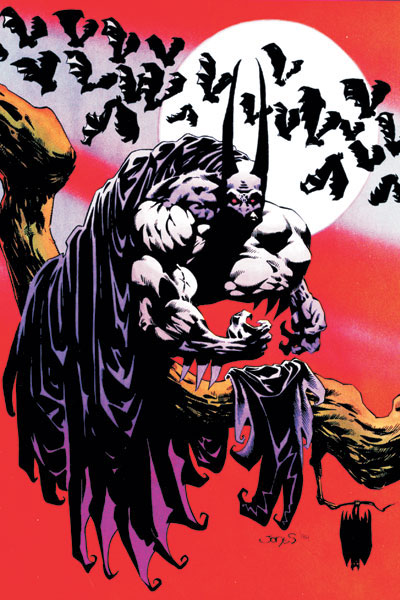 Batman versus Dracula â€“ what an idea.Â Two of the biggest names in their respective literary genres, comic books and literature, respectively, going at it once again.

And for the first time, the caped crusader loses.

Cue the moment of shock and awe right now.

Thatâ€™s right. In one of the multiverses of the DC Universe, Batman fights a legion of vampire zombies being controlled by the dark prince and in the midst of all the chaos, he slowly succumbs to the curse and becomes one of them.

The story starts with a bunch of local Gotham hookers and junkies, getting killed and winding up with strange markings on their necks. During this time, Bruce Wayne is having reoccurring nightmares about a vampire named Tanya. It turns out that she is a real vampire and member of a resistance that has been hiding underground for centuries trying to kill the dark lord.

They obviously havenâ€™t been successful.

However, with the aid of the Dark Knight for some awesome zombie killing, they manage to destroy all but the big boss. In order for him to stand a chance, Tanya gives Wayne a gift in a dream and it slowly transforms him into a creature of the night. But because he does not drink human blood and only a special formula, he is still pure and can walk in daylight, have rational thoughts and control his lust.

As the story progresses, things take a grim turn for the Caped Crusader as he succumbs to the curse and manages to drink the blood of an enemy.Â Once this happens, Batman is no longer pure of heart and slowly must fight an arsenal of his enemies such as the Joker, Two-Face, the Scarecrow and more while attempting to fight off the monster slowly being released to the world.

While fighting off the vampires curse, Batman has never been more human. For the first time, he shows us true emotions of anger and sorrow while still trying to be a hero. He becomes even more of a tragic hero than ever and the story Doug Monech has written grips the readerâ€™s attention while featuring great artwork by Kelley Jones, Malcolm Jones and John Beatty. The story adds even more depth to Batmanâ€™s character without ruining any of what weâ€™ve seen before.

One nice touch is the addition of Selena Kyle, this time as a were-cat. It sounds a little silly now, but she adds more drama to the storyline and is truly a Juliet to Batmanâ€™s twisted Romeo.

Just another element that makes â€œTales of the Multiverse: Batman – Vampireâ€ one of the best graphic novels around.

With a compelling story, great artwork and an even closer look into the mind of the Dark Knight, this work still manages to separate you from everything Batman has ever seen, faced and done before. Nevertheless, his descent into madness only captivates you to continue reading.

The next time you think â€œwhat would Batman do?â€ it might not be what you were hoping for.