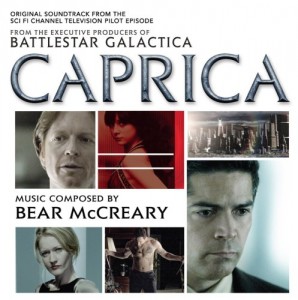 â€œCapricaâ€ the original soundtrack, released by La-La Land Records, starts innocently enough, but in less than a minute, your spine will be glowing red with chills.

The sound here is so full of depth and richness that itâ€™s easy to forget you are listening to the score to the pilot episode of SyFy Channelâ€™s upcoming series. The full series doesnâ€™t air until 2010, but the soundtrack firmly creates a new musical foundation for a series that hopes to stand on its own two feet.

For fans of â€œBattlestar Galactica,â€ this spin-off album is an exhilarating listening experience.

Dialing back on the use of exotic instruments and ethnic percussion, McCreary gives â€œCapricaâ€ its own flavor in a deliberate effort to distance itself from its parent series. Though it never forgets its heritage, the album pays homage to ideas established on â€œBattlestar Galactica.â€

There are 18 tracks in all on the CD that tell the bittersweet tale of a far-flung civilization at a crossroads. McCreary uses small elegant orchestration to whisper about a society at the peak of its powers, its wealth, and its underlying decay.

This is a living breathing metropolis at the center of a doomed world. These are the sounds of a fatherâ€™s broken heart, of a daughter lost to a senseless crime, a wife drowning in grief, a scientific breakthrough of frightening significance. This is exactly how the prequel to the popular series â€œBattlestar Galacticaâ€ should sound like.

â€œCapricaâ€ is far more woodwind heavy than his previous works. Flutes, oboes and the English horn are the instruments that he chooses to use in establishing the theme at the center of this story. A string section also lends the show a formal if not classical touch. These instruments work incredibly well in reinforcing the setting and story.

â€œThe Graystone Familyâ€ is the first track on the album setting the stage as the scoreâ€™s backbone reiterated by the viola often times. Tracks such as â€œTerrorism on the Levâ€ and â€œCybernetic Life Form Nodeâ€ however could have been heard on any episode of â€œBattlestar Galactica,â€ with the pulsing ethnic rhythms of taiko drums and dudeks making brief but memorable statements. â€œIrrecoverable Errorâ€ and â€œThe Adama Nameâ€ perfectly support key moments in the film while the latter marks the welcome return of a theme from â€œBattlestar Galactica.â€ Finally â€œZoe Awakensâ€ is creepy as can be, befitting a pivotal Frankenstein moment in the life of the series.

The soundtrack is a fresh start yet capitalizes on its heritage. Peaking with emotional heights seldom heard on television. Achieving a sound all its own that perfectly complements the moody tone of the two-hour episode, â€œCapricaâ€ belongs in the collection of any avid collector. The music drives the story.

Tied to emotional arcs rather than specific character themes, McCreary has delivered a touching, ominous, thrilling musical journey that will leave fans spellbound and seduce any listeners willing to give it a try.