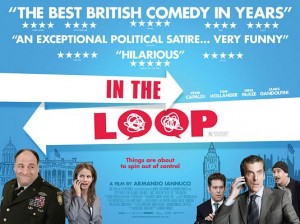 â€œIn the Loopâ€ is a comedy about characters whoâ€™ve grown so accustomed to chaos that itâ€™s beginning to feel normal. Theyâ€™re part of a system that they donâ€™t quite understand, one where the only thing anyone can agree on is anarchy. The joke here is that people who look like theyâ€™re in charge are the ones being manipulated behind the scenes, where everybody is probably more confused than they let on. When youâ€™re trying to deceive people all around the world, you should make sure that you know what youâ€™re talking about first.

Simon Foster (Tom Hollander) is a British politician who probably has less power than his title suggests. Heâ€™s the minister for international development, but the guy whoâ€™s really holding the strings is Malcolm Tucker (Peter Capaldi), the director of communications for the prime minister.

When Simon is interviewed about tension between the Middle East and the U.S., he says war is â€œunforeseeable,â€ which sends Malcolm into a fit of angry panic. He tells Simon to avoid answering tough questions and that he should stick to the script during interviews. Itâ€™s too late, though â€“ the line is interpreted by the media as pro-war.

All of this gets the attention of Lt. Gen. Miller (James Gandolfini) in Washington, who doesnâ€™t think the war makes any sense. He and Karen Clarke (Mimi Kennedy), the U.S. assistant secretary for diplomacy, show up for a war committee and make their case against military involvement in the Middle East, which is starting to gain support.

Meanwhile, Karenâ€™s aide, Liza (Anna Chlumsky), has a briefing paper that explains why going to war would be a mistake. (Itâ€™s called â€œPost War Planning: Parameters, Implications and Possibilities,â€ which people refer to as PWPPIP.) She tells her friend, Toy (Chris Addison), Simonâ€™s political adviser, that a paper like this wonâ€™t be very popular with politicians who want to get this war off the ground. She neednâ€™t worry â€“ in spite of what her paper says, itâ€™s bound to get misconstrued as some robust war cry. People in public relations are known for that sort of thing.

The movie is confusing, but not in a bad way. In fact, that’s the only way a plot like this can work â€“ when youâ€™re dealing with people who spin facts for a living, you canâ€™t be sure where the lie ends and the truth begins. Whatâ€™s funny is that everyone here seems confident that they have everything they need to work this stuff out, not knowing that theyâ€™re just as clueless as the next guy. So much for that â€œNo Spin Zoneâ€ that fellow on Fox News has.