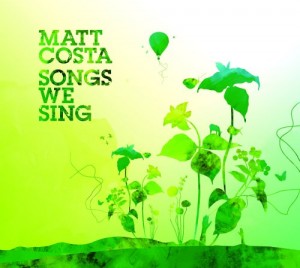 For those of us that grew up on the sounds of acoustic legends like James Taylor and Jim Croce, the name Matt Costa is one that will eventually become a familiar one.

Creating a hybrid between acoustic rock, folk and Indy rock, Costaâ€™s musical talents are engulfed in unbridled passion and vigor, channeled through lyrics of love, life and loss.

His debut album, â€œThe Songs We Sing,â€ which was released in 2005 on Jack Johnsonâ€™s Brush Fire Label, is a modern day masterpiece that is as charming as it is catchy. Consisting of 13 tracks, â€œThe Songs We Singâ€ brings Costaâ€™s talent to the forefront, showcasing his down to earth and comfortable voice [imagine a cross between a less pop-oriented Howie Day with the charisma of Steve Miller] and some of the best acoustic licks any fan of the genre could ask for, creating one of the best albums of the year.

Fans of Jack Johnsonâ€™s music will feel right at home with Costa, while fans of soft-rock and folk may need to listen a little more before theyâ€™re hooked; but nevertheless will be in time.

If Costaâ€™s imaginative lyrics, soulful acoustic sound and passion drenched voice isnâ€™t enough, heâ€™s also pretty versatile. The song â€œBehind the Moonâ€ sounds like something youâ€™d hear on a 30-year old Bob Dylan album and â€œWhisky and Wineâ€ has an almost Jazz/Big Band feel to it. However, despite his ability to give his music a multi-layered flavor at times, Costa is at his best during songs like â€œSweet Rose,â€ â€œCold Decemberâ€ and â€œSunshine,â€ where he utilizes his voice and guitar ability more than ever before, creating modern rock textures and themes that are sure to be implemented by dozens of other in the near future.

Overall, â€œThe Songs We Singâ€ is a multifaceted enigma of modern-day music that has something for everyone. A tribute to the great song scribes of the past, yet a thought-provoking and awe-inspiring initial release for a great new artist, it is a worthy addition to anyoneâ€™s musical library and is a great change of pace for those who are sick of the watered down commercial rock that is flooding the market nowadays.