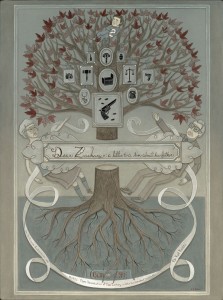 Kurt Kuenneâ€™s original intentions for his new documentary, “Dear Zachary: A Letter to a Son About His Father,” were to explain the death of the filmmakerâ€™s oldest friend to the son who would never meet him. Itâ€™s ironic that by the time he finished making it, he had expressed his grief so maturely that the film mightâ€™ve been too disturbing for little Zachary to contemplate. The movie has bruises that throb with anger and despair, and because Kuenne accepts that nothing can be done to heal them, thereâ€™s a great deal of sadness to the way he analyzes every little hurt. Some movies are so emotional that they seem to weep â€“ this one almost bleeds.

The basic story of Kuenneâ€™s longtime friend, Andrew Bagby, is too simple to hold down a movie like this by itself. He works with lots of details, facts, names and dates, but he uses them merely to explain his feelings. His friendship with Andrew is a key element here, and he mentions things other documentarians would forget: Itâ€™s horrible enough that Andrew was killed by his deranged girlfriend, Shirley Turner, but Kuenne, who remembers the way Andrew used to chew his fingernails to stubs, calls attention to how his autopsy comments on them. That kind of minor detail mightâ€™ve been overlooked by other filmmakers, but in his hands, itâ€™s chilling.

The murder was only the beginning, though. Shirley took advantage of her Canadian citizenship and fled to Newfoundland, where she was arrested and released on bail in the same day. About two months later, she organized a press conference and revealed that she was pregnant with Andrewâ€™s baby, which inspired his parents, David and Kate Bagby, to obtain custody of the child. It didnâ€™t come easy: They both quit their jobs and spent most of their life savings to move to Newfoundland, where they endured the various delays of an arthritic legal system. Eventually, David and Kate got visitation rights, but they were reluctant to share their grandchild with the woman who murdered their son, as we see in home movies of the baby with his mother and grandparents during their strange parodies of harmony.

Some viewers might be seduced by all the twists â€“ and indeed, the events in this movie feel like plot points in a suspense thriller â€“ but thatâ€™s not what “Dear Zachary” is about. Itâ€™s about the impact we have on each otherâ€™s lives, and when Kuenne made this film, he had no trouble finding people who remembered Andrew fondly. There are countless interviews with people who remember little things about him, and to discover such intimate details is to see what they saw: He was always on time, he only wore shorts and not pants, he was an avid shutterbug. Kuenne was right to make a film that remembered him as a friend, not just as an unfortunate man whose girlfriend shot him dead, film at 11.

But this is also a diary of spite and venom, and Kuenne can hardly control himself whenever Shirley comes into the picture. Heâ€™s not the only one: Whenever David talks about her, he makes her sound like the girl from hell.

Whatâ€™s particularly interesting is how Kuenne, in the middle of making the film, was obligated to change his plans for it over and over again to work around the horrible things Shirley did. Hitchcock said that â€œin feature films the director is God; in documentary films God is the director.â€ Hitchcock may have been onto something, but if David is right about Shirley, then the devil lent her hand in the making of this film.

Miles Davis once said that the hardest thing for a musician to do is to sound like himself.Â  In this...