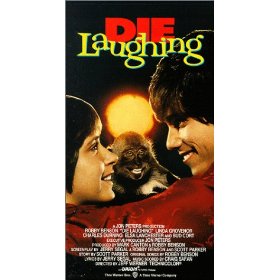 “Die Laughing” was a labor of love for actor Robby Benson (“Tribute,” “Ode to Billy Joe). Not only did he play the lead of Daniel Pinsky, but he co-produced, wrote the screenplay and composed and sang several original folk songs for the film.

Of course he did have some help from his father, Jerry Segal (“One on One”).

In spite of this, Jeff Werner’s (“Cheerleader’s WildÂ Weekend”)Â film was poorly received by critics and audiences alike, causing the film to often be part of a double bill at the movie theatres.

The trailer for this motion picture was recently featured on “42nd Street Forever Volume 4: Cooled by Refrigeration.”Â It contains several interesting scenes not included in the movie.

That is a shame because this movie is an underrated comedic classic. The film is light in tone and never seems like reality in anyway, but it is fun. The concept is a little out there and that allows for more outlandish enjoyment.

Pinsky is aspiring musician and full-time cab driver in San Francisco.Â He’s a dreamer with a big heart that never lets anything get him depressed.

But after a man gets in his cab and is murdered, Pinsky grabs his guitar and the man’s suitcase and goes on the run.

Admittedly, this sounds like “The Hardy Boys” meets “The Monkees” and truthfully that is part of its appeal.

He is now wanted for murder and around the same time his band enters a very big contest. So naturally he runs to the house of his girlfriend’s sister, AmyÂ (Linda Grovenor, “Wheels of Fire”).

On top of everything else, they discover that in the big suitcase is a little monkey â€“a monkey that can keypunch a formula that will cause some explosive results.

So naturally, the Russians want the monkey.

Hey, if Clint Eastwood can make a movie with a monkey, why not Robby Benson?

The film is filled with interesting chase scenes and a romantic story at its core with some great folk songs throughout.

Benson is no Art Garfunkel, but that being said, he is a pretty good folk singer. His singing adds some inspiration to the film. He wrote the opening song, “Mr. Weinstein,” in addition to “All I Want is Love” and the closing song, “Far Side of a Dream.” His level of sincerity and the fact they are catchy little tunes allows the audience to see the love that went into making this film.

“Far Side of a Dream” is maybe the best of the three. It is an upbeat song about trying to make it in the world and that also shadows the character of Pinsky.

Bud Cort (“Harold and Maude”) plays Mueller, an evil genius that wants the monkey for his own purposes. Cort is delightfully evil in his role that could only be described as a grown up Stewie Griffin.

Side note, Cort is terribly bruised up in this film because he was recovering from a near fatal car accident.Â Originally having received the role prior to that, producer Jon Peters said that the role would still be his upon recovery.

The supporting cast is led by the adorable Grovenor. She plays the girl-next-door and perfect girlfriend most guys wish they had. She stands by Pinsky through this hellish mess and like Pinsky,Â you can’t help but fall in love with her too.

Also along for the ride is Charles Durning (“Tootsie”) as the cab company owner to whom Pinky is giving an ulcer. Durning shines in this light comedic role.

Because of the wacky premise, in order to enjoy this movie, you’ll have to be willing to turn your cynical side off.

This was made at a time when these types of films were popular [1980] and it is an extremely well done comedy.

So while you might not “Die Laughing” watching it, but it will induce its fair share of smiles throughout.