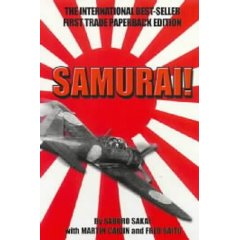 Saburo Sakai was a fighter pilot for eight years, shot down 64 aircraft, was wounded twice, lost an eye, was never shot down and never lost a wingman. Published in 1957, â€œSamurai!â€ by Martin Caidin and Fred Saito was one of the first books that detailed a first-person account of the war from the Japanese side of the conflict.

Caidin was a prolific aviation writer for most of his life. He has an easy-flowing style that gives you a fair amount of detail without bogging you down with too much technical wording or phrases.

Consequently, his books are excellent for people unfamiliar with combat aviation or are looking to start reading about it. The book is based on Saitoâ€™s interviews with Saburo Sakai and read as if they were written in the first person for the most part.

The book chronicles the life of Sakai, a poor farm boy of samurai ancestry. We follow his childhood and struggles with school. He decides to join the Imperial Japanese Navy (I.J.N.) at the age of 17. He vividly describes the brutal conditions of Japanese navy training and life as an enlisted man on a battleship. We get an insight on a culture and mentality that would never be allowed to exist in this country, even in the mid ’30s. As sadistic as Sakaiâ€™s introduction to the navy may have been, we quickly see how that toughness serves him well.

Sakaiâ€™s chronicle of his pilot training in the navy is truly eye-opening. With a nearly 90 percent washout rate, the Imperial Japanese Navy had some of the highest quality pilots in the world. The Japanese favored training in dog fighting and due to that, they built nimble, lightly constructed fighters with light armament.

Sakai gets his baptism of fire during the Sino-Japanese war in China and after a rough start becomes an accomplished pilot and a hero in his small hometown. Toward the end of his tour in China, we get introduced to the â€œotherâ€ star of our book â€“ the Mitsubishi A6M Zero Carrier fighter.

Deriving its name from the last digits of the Japanese calendar (00), the Zero had an enclosed cockpit, retractable landing gear, an auxiliary jettisonable fuel tank, two machine guns and two heavy 20 mm cannon in the wings. Its Allied counterparts in 1939 were either biplanes or rudimentary open cockpit monoplanes. The Zero was the first naval fighter that easily outclassed its ground-based counterparts and was master of the Pacific skies till late 1942.

Sakai begins the war in the Pacific by attacking American airfields in the Philippines, flying some of the longest missions in history to date. Sakai and his squadron quickly mop up most of the opposition and areÂ  fighting next in the Dutch East Indies (modern-day Indonesia).

At this point, we find a flaw in the book. Caidin took liberties with some of Sakaiâ€™s exploits, one case being an aerial dogfight that takes place in the East Indies that Sakai disputes happened. We see two or three other such discrepancies with the book.

We follow Sakai for the next year, racking up an impressive amount of kills and we also get insight into several other well-known pilots. Sakai is severely wounded in late 1942 and is sent back to Japan. On his return to combat in 1944, he finds a very different war.

Most of his squadron mates have been killed and the allies now field aircraft superior to the Zero and also appear in far greater numbers. Sakai fights at Iwo Jima and ends the war in fighting in the air defense Japan itself.

In between his combat stories, we do get insight into his private life. He ends up getting married during the war and both his wife and his mother become pillars of strength for Sakai at various low points in the war.

Overall, “Samurai!” is an outstanding work. While it does have some embellishments, these are documented elsewhere and donâ€™t detract from the overall narrative. Itâ€™s filled with non-stop action and a wonderful insight into the Japanese mindset. This is a must have for any aviation fanatic. So strap yourself into the cockpit and let Saburo Sakai be your wingman.