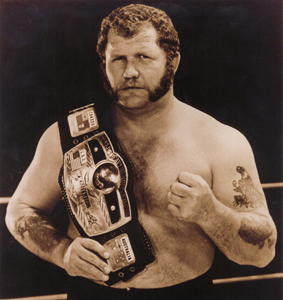 In life, success can be determined in two ways: A long list of accolades that cement your reputation in history for everyone in the world to see, or a candid and modest understanding of what youâ€™ve done that makes everything youâ€™ve accomplished feel even more genuine and real.

Harley Race has both.

For over 40 years, Race has been a fixture in wrestling history, winning an unprecedented eight NWA world heavyweight titles during his 29-year wrestling career. After Race retired as an active wrestler, he went on to manage both Lex Luger and Big Van Vader to WCW world heavyweight titles, and has been involved in the promoting aspect of the business since as early as 1972.

Simply put, Race is a legend in his own time. His smash mouth, tough-as-nails style has paved the way for hundreds of other wrestlers all over the world.

â€œIf I could do it all over again, Iâ€™d love to do it,â€ said Race, via telephone in Kansas City.

â€œIt was a nightmare sometimes,â€ said Race. â€œProbably the most grueling trip I ever made in defending the title was when I defended it twice on a Friday night. The first time in Tokyo, Japan, and the second in St .Louis on that same Friday night because we gained a day coming back from Tokyo. I flew right out of St. Louis the following morning and wrestled Carlos Colon in Puerto Rico on that Saturday.â€

Aside from being nationally known throughout his wrestling career, Race is also known throughout Japan as well, making a mark in the industry as a hard-nosed competitor that could compete in the ring with any wrestler in the world.

â€œI went to Japan for the first time in 1969, and Iâ€™ve been there 71 times since. I just happened to come there at the perfect point in time. Before that, there was mostly mat wrestling done there, and I was the person to take the action off the ground in Japan and started doing a lot of the things you see on TV today. It was electrifying to those people, because they had never seen anything like that before.â€

Race, who compares his in-ring style to the likes of modern-day wrestlers Kurt Angle and Triple H, gets a kick out of seeing younger wrestlers perform the moves he made famous. â€œHe [Triple H] uses a lot of my stuff,â€ said Race. â€œAnytime youâ€™re copied or mimicked in any way, shape or form, by a guy with credentials like his, how could you not like that?â€

While staking his name in the wrestling business throughout the late ’60s and early ’70s, Race began getting involved in the promoting aspect of the industry, something that he still does today as the founder of World League Wrestling, where he books live events in Missouri, Iowa, Kansas and Illinois. WLW even has a working contract with the popular Japanese wrestling promotion, NOAH.

In addition to promoting, Race has also been training wrestlers to a degree of success. Former WWE tag-team champion Trevor Murdock started wrestling for Raceâ€™s WLW promotion in 1999. Race believes that Murdockâ€™s involvement with the WWE will also open the door for some of his other talented wrestlers as well.

â€œI think the chances of somebody going to the WWE are pretty good now that Trevor has broken the seal,â€ said Race.

However, despite all of Raceâ€™s success in the wrestling industry, the reason behind the founding of WLW was more of a personal one, revealing just how true a man Race really is.

â€œWe started World League Wrestling when my wife retired from banking. We decided that we needed something to do, so this is the only thing Iâ€™ve ever done,â€ said Race. â€œShe means everything in the world to me. The best thing thatâ€™s happened to me in my lifetime was meeting her.â€

This article was originally published in Feb. 2006.