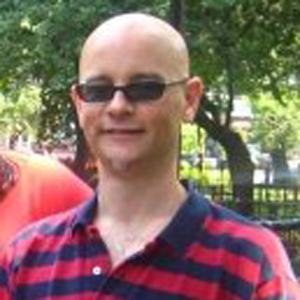 RF: Do you ever utilize your comedy background in teaching?

TH: I think constantly. I think anytime you’re up in front of people, it’s really helped a lot. Though, teaching is very different from performing. Students can tell whether you’re performing or teaching them something. I also pull a lot of that into the work I do. I try to build pieces that have a sense of humor. I kind of poke fun of certain aspects of our personalities. So, yes. [laughs]

TH: [laughs] Well, I guess, you know, after stepping away from television and auditioning on a daily basis, you know, it kind of sucks and it gets hard after a while. I had some free time, so I just started messing around with rich media, new media, and after playing with it for a couple of years, it seemed to be something that I could blend all of my old skills into something new.

Once I stuck with that for a while, I thought that was perhaps it would be a good idea to get a degree in it, so I started looking at schools in New York and California, and that’s when I found the Interactive Telecommunications Program. It was very different than what I thought I would find, but it offered things that I thought would be really amazing. It’s actually there that I moved away from rich media and building Web content to actually getting into working with taking apart electronics and building my own electronics and programming my own microprocessors.

RF: What was your favorite cartoon growing up?

TH: That’s a toughie, I think. I’m trying to remember all of them because I watched a lot of cartoons as a kid. I always thought â€œJohnny Questâ€ was pretty cool cartoon, but maybe because it was on rarely. I think that’s also why I enjoy â€œThe Venture Brothersâ€ now, cause it’s such a spoof on â€œJohnny Quest.â€

RF: What’s too much when it comes to comedy?

TH: That’s a tough call to make. The rule of thumb is comedy is tragedy plus time. So, you kinda have to let some time pass. Currently, more and more people are willing to step over that line. The jokes come out a day later. Some things are just considered tasteless depending on the issue.

We actually talked about this when the Challenger blew up, we had a discussion about how long we have to wait until we can do a sketch on the Challenger. That’s still a sensitive issue… now it’s a little different.

RF: On your Web site, you say your interest is in “examining the bridge between humans and our technology.”

RF: Do you think that humans and machines can live peacefully?

TH: Well, they say it’s only going to be 10 years until we have an artificial brain, so I guess we’re going to find out. It’s kind of interesting because if you look throughout history, humans have been kind of used as machines, in fact we’ve even been described as “the human machine” … what are the mechanics of the human body? I don’t know. It’s a tough one. There are so many humans now that you’re going to have a wide range of experiences. Some humans can’t live with technology at all.

If you look back a couple of hundred years ago, back to when the automated loom was invented in France, it was going to automate fabric. Giant looms, people used to sit… When they invented that, all the people who were manually operating the looms, they were led by a man into a textile mill and they trashed all the automatic looms that were replacing them. And, you know, you still get those same complaints today. 20 years ago when Photoshop and Illustrator came out, illustrators were starting to freak out. In fact, just a moment ago, we were talking about computer animation… you know, the human quality is lost.

RF: Can you describe your favorite meal?

TH: My favorite meal… I just had one the other day. It was this excellent filet mignon with sort of a wasabi sauce and a potato and some nice peppers. And sake. It was excellent.

TH: That is actually a toughie, because I try to cycle a lot. I use the word “dude” for a lot of things. I will use it to address someone, but I will also use it to express upset.

RF: If you could have lunch with any historical figure, who would it be and why?

TH: That’s another toughie. That’s changed over the years. I don’t know, Tesla would be pretty cool right now, just because of the work I do. A lot of things that Tesla worked with are now being rediscovered. One of the things is wireless electricity. They’re all talking about it now, but Tesla was working on that years ago. I’d actually like to sit down with Tesla and Edison at the same table. They were actually fighting over AC versus DC power, which is why I would like to sit with them at the lunch table. Factoid: Edison electrocuted an elephant to prove that AC was too dangerous.

There are all sorts of people, there are any number of pirates I’d like to sit down with â€“ Genghis Khan. Several movie stars. In a way, I would almost not want to, as a historical figure, we have a picture of them in our minds, you know, and in some ways, there’s that saying, “don’t meet your hero.” So in a way, I’d rather not meet my hero. I’d like to go back in time, though, not the other way around… maybe after visiting them they could come back to visit.

RF: What do you think separated â€œThe Stateâ€ from other comedy shows at the time?

TH: Well, there were 11 of us… and our sensibility was just so different. There wasn’t any one voice. I think with a lot of sketch comedy groups you have one voice, or a producer. â€œSaturday Night Liveâ€ and I think â€œKids in the Hall,â€ they have Lorne Michaels. So there was, like, one voice. For us, it was a small mob. It just kind of moved of its own power. Plus, we kind of didn’t know what we were doing, but we kind of did.

RF: I guess this will be the last question. I read that before the writers’ strike last year, there was talk of a â€œStateâ€ movie. Tell us about that.

TH: Yeah, we were going to do a special. That’s TV, that’s what happened. A lot of ideas get talked about, some happen, some don’t. You know, I don’t think I’d write anything off. It’d be nice if something would happen. You never know. Right now, I think it’s all on hold, so we’ll see what happens. Everything’s a slight possibility. We all talk every once in a while about it. I don’t know if there’s actually a “movie” movie… like a theatrical release, but it’d be nice to put some of the stuff on tape.