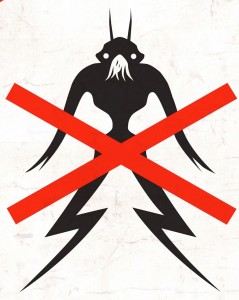 â€œDistrict 9,â€ the ambitious brainchild of newcomer Neill Blomkamp, is a refreshing sci-fi action flick from Peter Jacksonâ€™s Wingnut Productions. In ways similar films only pretend to, this movie is an intelligent thrill ride from beginning to end that meets the hype and leaves you wanting more.

At $30 million and shot entirely in and around the city of Johannesburg, South Africa, the production reaches for blockbuster status and comes so close you’ll wonder why Hollywood canâ€™t do better. This is high concept satire that blends contentious political commentary with humor and levity. Add to this the outstanding visual effects and performances from human and non-human alike and you have a central premise supported by real character and believability.

At the storyâ€™s heart is dweebish desk jockey, Wikus van der Merwe (Sharlto Copley). Multi-National United, the second largest private military corporation in the world, has given Wikus a promotion and the dirty task of overseeing the forced relocation of the aliens. The Prawns, a racial slur preferred by the xenophobic humans, are to be moved to more comfortable surroundings. MNUâ€™s goal is officially humanitarian, but truly itâ€™s about fattening their profit margins upon the exploitation of the Prawnâ€™s weapons technology.

As MNU troops begin the crackdown, Wikus is exposed to Prawn biotechnology during a raid in the D9 shantytown. Wikus, hunted now by both MNU and Nigerian racketeers, finds an ally in a smarter than average Prawn named Christopher Johnson. The race is on for Wikus and Johnson to figure out a way to get back to their lives, as the world watches with unblinking eyes.

While the premise of this story and the type of events that unfold have been told in the past and in a myriad of different ways, it’s never been told this inventively before. Archival footage, news reels and talking head interviews chronicle the nearly three decades of backstory. As the alien population grows, so do incidents of urban warfare, drug trade, weapons dealing and even inter-species prostitution. A bit like watching an oddball episode of “Frontline,” the geopolitical fiction seems all the more plausible as seen on the screen. The movie is a big screen version of a CNN report, frantic, fast paced, you will miss something if you blink.

Blomkamp has a keen understanding of photography melding CGI characters with practical shots in surprising and effective ways. Shots of the stranded spaceship hovering over Johannesburg in the heat and grime of the setting sun are a few of the remarkable shots in the movie. Trent Opaloch’s cinematography, blending seamlessly with the documentary style visuals, offers the feel of improvisation and on-the-scene shooting. Clinton Shorter’s score is appropriately moody to the filmâ€™s setting and story. Once the body popping, cow tossing, bullet catching action ramps up, you will want to go for a second round.

Poignant, at times funny, but never wavering from its premise, “District 9” is an instant cult classic. If you have seen the trailer the best parts have not been spoiled. Summer action movies donâ€™t get much better than this. The film rides on the talent of total unknowns but among them Blomkamp has started something that will have people talking until his next bow.