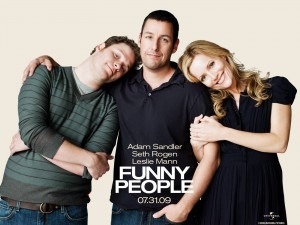 It might be the most plot-descriptive movie title since “40-Year-Old Virgin.”

“Funny People,” Judd Apatowâ€™s latest installment to what could be termed the â€œdick jokeâ€ genre, is a film featuring a flock of familiar funny folks and, yes, the formula forges a funny flick.

The immediate question: Where does it rank comedy-wise? Itâ€™s several inches short of reaching the bar set by “Knocked Up” and “Superbad,” but itâ€™s a good foot above Apatowâ€™s recent offerings (“Forgetting Sarah Marshall” and “Pineapple Express”). And if plot, acting and story depth count for much, it might be the directorâ€™s best work.

Adam Sandler, the lead, essentially plays himself as George Simmons, an actor/comedian who has attained fortune and fame. Apatow wastes little time in setting the stage as the second scene â€“ following old camcorder footage of Sandler making prank calls in the â€˜80s â€“ puts Simmons in a doctorâ€™s office, hearing the results of his blood tests revealed a rare form of leukemia. Realizing his mortality and reflecting on his life and comedic oeuvre, Simmons sets out to reconnect with his standup roots. He visits a dinky comedy club he hadn’t performed at since becoming â€œGeorge Simmons.â€ There he meets Ira Wright (Seth Rogen), a deli worker and struggling up-and-comer whom he eventually hires as an assistant and joke writer.

Rogen excels in his typical role: the easy-to-relate-to charismatic goofball who finds himself in an awkward situation. In addition to penning stand-up material, Ira serves as Simmonsâ€™ sounding board (heâ€™s the first to be told about his condition), advisor and quasi-best friend. He gets a taste of the good life as they travel together (via private jet) for shows and even share groupiesâ€¦ sort of. Much of the comedy comes from their unique relationship and playful banter.

There are sympathetic points in which there is a drift from comedy and Apatow attempts to play pulmonary puppet master, but those moments are brief and there is never a great interval between laughs.

In one scene Simmons becomes ill in the early morning; he can’t sleep and, after remaining mostly composed and jovial during his ordeal, erupts in a moment of self-pity and frustration. But it quickly swings back to humor in the next scene, in a hospital, when a doctor attempts to explain the effects of his medication while Simmons and Ira mock the docâ€™s German accent.

The rapid-fire jokes, some of them improvised, are reminiscent of the â€œKnow how I know youâ€™re gay?â€ shtick in “40-Year-Old Virgin.” And there is plenty of that between Ira and George â€“ particularly when George pokes fun at his assistant â€“ and the supporting cast of class clowns, including Iraâ€™s comedian roommates Leo (Jonah Hill) and Mark (Jason Schwartzman) supply a surplus of jocularity. Between that foursome, there isnâ€™t a shortage of one-liners, celebrity and movie references and, of course, dick jokes. Lots of dick jokes.
The storyline begins to turn when Simmons, who had become emotionally ensconced in a comfortable but wonted existence, realizes whatâ€™s been missing from his life. You know, the rich guy standing in a million-dollar garden who hasnâ€™t sniffed the roses. Enter Laura (Leslie Mann), Georgeâ€™s ex-girlfriend from more than a decade ago whom he still has feelings for. With the help of Ira, they reunite and rekindleâ€¦ problem is she has a husband (Eric Bana) and two daughters (Maude and the adorable Iris Apatow).

Though the love story takes up a decent portion of the film, it isnâ€™t central â€“ gasp! â€“ nor does it detract from the overall theme. And, without spoiling the plot, it doesnâ€™t play out quite like the cynic would predict.

As well, Simmons doesnâ€™t have the expected terminal illness epiphany and become a different person. Though he bends a little, his negative traits remain for the most part and unlike Apatowâ€™s previous efforts, this one doesnâ€™t have a bromidic happy ending. Not all the loose ends of Simmonsâ€™ life are tied up; the director makes the loop but doesnâ€™t complete the knot. But that helps the film. It successfully maneuvers around clichÃ©â€™s chasm.

The movie’s strength is its dialogue, as is the case with most of Apatowâ€™s projects. The lines seem natural â€“ what youâ€™d expect from a bunch of funny people conversing â€“ and the actorsâ€™ ability to freelance makes the characters seem real and relatable.

Another plus is the star-studded roster and the random (and weird) cameos. A drunk Sarah Silverman acting a fool in a bar; Andy Dick giving sound advice; Eminem cursing out Ray Romano in an upscale restaurant; RZA of the Wu-Tang Clan as Chuck, a deli worker, serving macaroni salad in a supermarket.

The knock: Sandlerâ€™s signature silly voices and corny impersonations are, well, corny. But if you were OK with them in his other movies, you wonâ€™t mind â€˜em this time.

The movieâ€™s glaring flaw is its length (145 minutes). Half an hour could have been shaved off the runtime without sacrificing much. The film drags near the end, probably an effect of Apatowâ€™s wanting to throw a changeup and not put a bow on the story where most would have wrapped.

But one drawback â€“ which many wonâ€™t even mind â€“ doesnâ€™t take much away from a quality work. It doesnâ€™t classify as a must-see movie, but itâ€™s a should-see. â€œFunny Peopleâ€ is well worth your time, if you have the time.