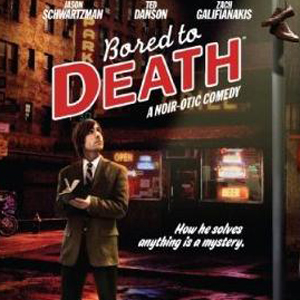 It has been said then when watching a movie, you will know in the first 10 minutes if you will enjoy it. That hook to the movie is present in that time, and with television shows we often allow two episodes to get the look and feel of that particular show. If this is the case, then “Bored to Death” has put the final nail in the coffin with the second episode, “The Alanon Case.”

The potential that was present in the pilot has seemed to sadly disappear, and the show is left with nothing to interest an audience on Sunday night. Your best bet is to head to bed early or tune into Fox’s “American Dad.” It is obvious that the show aimed high, and that gives the show a self-worth that it doesn’t deserve and is present in the supposed attempts at comedy made throughout the episode.

For starters, the case in “The Alanon Case” was boring, and the usual missing-person case with a twist that seemed farfetched and a little hard to believe considering the characters live in New York. Sometimes in New York it could be a year before you see your own neighbor, let alone the randomness of this entire episode. But even with an extended imagination, there were more mistakes then that.

The supporting cast of Ted Danson and Zach Galifianakis is unfunny, and that causes a major problem for a comedy series. George Christopher (Danson) needs to hide the fact he has herpes because he is giving a major speech, so naturally he wants our protagonist to punch him in the face. This scenario provides an unlikable and boring character to most people and a reminder of the comic strips in The New Yorker, which often leaves one wondering if that should be funny. Then Ray Hueston (Galifianakis) has bowel trouble on the train, which is supposed to be semi-funny but just comes off annoying, and later on he is seen wearing a cape while drawing for his comic-book character, leaving one to wonder what any of this means. The headache-educing stupidity of these supporting characters doesn’t help the already failing show, which should be called “Annoyed to Death.”

Jason Schwartzman does what he can to keep the main character of Jonathan Ames afloat, but he is not a miracle worker. This character is so self-involved it makes Carrie Bradshaw from “Sex and the City” seem witty and interesting.

This is a rare miss for HBO, and the old saying “time will tell” has told us that “Bored to Death” is itself a waste of time.