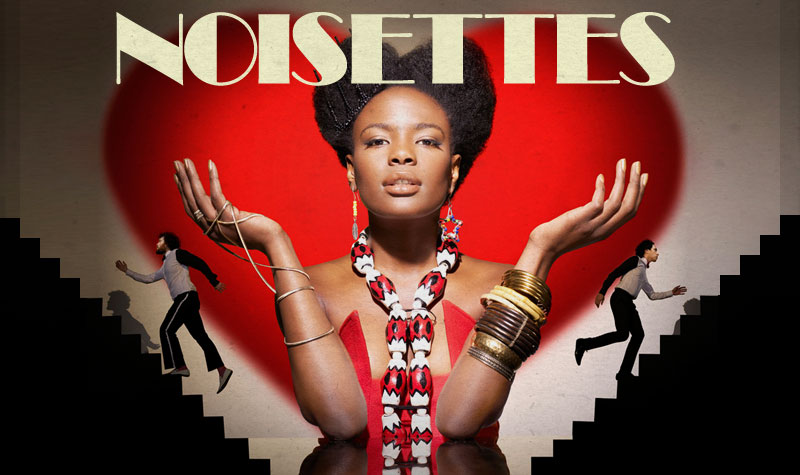 After two years, the Noisettes have come out with an eclectic mix of songs that will leave you with a conflicting set of emotions.

Shingai Shoniwaâ€™s voice shines in the title track. The upbeat, catchy tune betrays the lyrics in a good way. Itâ€™s a thought-provoking song that will have you bopping your head at the same time. â€œDonâ€™t Upset the Rhythm (Go Baby Go)â€ would be another run-of-the-mill rock song if not for the inventive way that Shinowa, Dan Smith and Jamie Morrison utilize bass, guitar and drums, respectively. The lyrics are repeated constantly, but the arrangement makes it fresh at every refrain. No wonder it peaked at number two on the U.K. music chart.

The Noisettes show their versatility on the track â€œNever Forget You.â€ Influences from Motown, Ronnie Spector and the Philadelphia sound shine here in the melody, lyrics and musical arrangements â€“ this track will have you shimmying in no time. Always keeping their listening audience guessing, â€œSaturday Nightâ€ is a combination of disco and electronic music. Surprisingly, this experimentation in sound is a highly satisfying listen that will have you dancing around your bedroom.

The Noisettes then take a shot at the folk genre â€“ and make it work. The lyrics on â€œAtticusâ€ are compelling against a stripped down guitar backdrop. Haunting and melodic, the song will stay with you long after it is over.

Lead vocalist Shoniwa once again makes a potentially mundane song thought-provokingly spine chilling. â€œEvery Now and Thenâ€ is subtle in its emotionality. The loneliness in this track makes it sad and listenable at the same time. However, even her voice could not save â€œ24 Hoursâ€ and â€œBeat of My Heartâ€ from being boring tracks. â€œBeat of My Heartâ€ is a hyper-paced hodgepodge, while â€œ24 Hoursâ€ is too slow to the point where it puts you to sleep. After the previous songs, youâ€™ll begin to wonder if the Noisettes have run out of steam.

But then they come back strong with the folk/R&B â€œSometimes.â€ This unusual combination of genres surprisingly complement each other. The harmonizing vocals of Dan Smith alongside Shoniwaâ€™s velvet sound makes for a soothing listening treat. The guitar in the background only enhances this melodic tune. With the last song, â€œCheap Kicks,â€ playing, you will constantly find yourself pressing play again to repeat the listening experience again. Itâ€™s a rock song encapsulated in R&B, making this song a joy to listen to.

Overall, this is a solid album with mostly well-done tracks that definitely has replay value. Once Sept. 22 hits, however you get your music, get this album â€“ and fast.