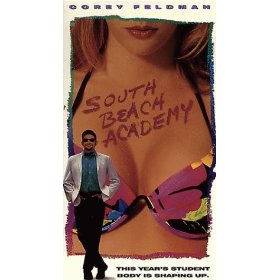 Oh, the horrors of having to witness the atrocious “South Beach Academy,”Â which should be retitled “The Sleazy Exploits of Grandpa Munster,Â a Killer Bimbo and a Goonie.” The latter title would be more fitting and allow a curious moviegoer to know exactly what to expect. This 1996 turkey manages to suck all the fun out of Ft. Lauderdale and naked women, while provingÂ that Corey Feldman has truly scrapped the bottom the barrel.

A look through the exploitation genre proves that many films have takenÂ the same premise, (“Screwballs,” “Spring Break” and “Hardbodies” to name a few) often set in Ft.Â Lauderdale and turned into comedic gold filled withÂ charm (and nudity). So what one must wonder is how is it possible to make a bad sleazy beach movie when all the elements for an entertaining time are present. That is a problem that the makers of “South Beach Academy” (and “Hot Moves”) could only answer.

To analyze the things that went wrong on this picture, one must start with the fallen star of Feldman. It is perplexing thatÂ Â at a young age he was excellent in “Stand By Me,” but has somehow forgotten how to act over time. Here, Feldman provides one of his worst performances for those that believed it could not get any worse then “Meatballs 4.” He hams it up from the start when we first get a glance of him driving down to South Beach, and the sunglasses get lowered to check out the pretty women of Florida. Then he speaks and ruins everything using a “Beavis and Butt-Head” voice to talk to a woman he almost hit with his car. For a large portion of the movie, Feldman’s character, Billy Spencer, can be found in the strip club. This serves no purpose to the plot, but the manager of the place is played by none other then Ron Jeremy.

Spencer’s character providesÂ annoying narration throughout, proving that post-production tinkering was probably done, but it is does not provide any help in this picture.

No need to fear: There is a somewhat muddled plot throughout the film, and that involves the closing of sleazy Uncle Gene’s training academy. This is the type of academy where women go to the beach to learn how to be bimbos, and Uncle Gene is portrayed with glee by Al Lewis. This was his second to last movie, and he just seemed so happy throughout the production of this crazy beach film. He can be found at the strip club, making out on the beach with a hot woman, or insulting some musclebound jerk. At his age, it his hard to fault this career move, and we can forgive Grandpa Munster.

Now the only way the place can stay open is if they play an intense match of volleyball with everything on the line. Luckily, Shannon McSorley (Elizabeth Kaitan, “Assault of the Killer Bimbos”) happens to be a pro-volleyball player that fumbled in the Olympics. (Right now, you can probably hear the voice of Beavis saying, “Oh yeah… the plot.”) Kaitan can’t act, but delivers all her lines with such serious conviction that it is so out of place in this picture.

Then we need a strong villain to propel the plot along, and character actor James Hong (“Blade Runner”) is not up to the task of that simple job. Hong has been great in many films, especially considering he was one of hardest working Asian actors in the business, and most ’80s films that needed an Asian actor went directly to him. But this film caused an amnesia of acting skills for everyone but Kaitan, who never had any to begin with.

Of course, what does work is the made-for-Playboy-TV feel, as it is peppered with tons of nudity, because naked women just seem to follow Lewis and Feldman around. But make no mistakes: This is humorless, bottom-of-the-barrel smut that has nothing to offer anyone that they can’t get online.

Avoid “South Beach Academy” at all costs â€“ which should not be a hard thing to do â€“ and theÂ picture has been forgotten since the early 1996 direct-to-video release. Interestingly enough, it resurfaced on DVD from Lions Gate as a joyless Feldman double feature with “Rock ‘n’ Roll High School Forever.”

Sadly, with so many struggling people trying to break into theÂ movie businessÂ with unique ideas, it is a crime that something like this was ever produced.