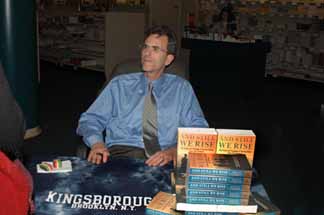 Growing up as an average student with a penchant for reading, Miles Corwinâ€™s road to success is a self-made one. Not having the grades to get into a private college, but armed with a desire to achieve, Corwin made his way through community college and in the process, fell in love with writing.

Now over twenty years later, Corwin is a best-selling author and award-winning journalist that prides himself in shedding light on events and people in the world that most would never pay attention to.

Known for his great reporting ability, Corwin received unprecedented access into both the LAPA and the departmentâ€™s elite detective unit for two of his three books, â€œKilling Season,â€ his first book, which went on to become a national best-seller and his third book, â€œHomicide Special.â€

Despite the success of both books, the one that arguably stands out the most in Corwinâ€™s career is his second book, â€œAnd They Still Rise: The Trials and Triumphs of Twelve Gifted Inner-City Students.â€ Believing it was the right time to switch his focus from crime in South Central LA to something more positive, Corwin dissected the road traveled by 12 young gifted students in South Central that never saw the light of day in the crime-obsessed media.

Hence, â€œAnd They Still Rise: The Trials and Triumphs of Twelve Gifted Inner-City Students,â€ was born.

â€œI had been covering crime for many years for the LA Times and I had written a book on crime in South Central LA,â€ said Corwin, via telephone in Los Angeles. â€œI just realized I was spending so much time writing on such a small segment of the people in South Central, the people who were getting into trouble and were causing problems and I was ignoring the other side, all those other kids that were good students, trying to do something positive. I wanted to write about the other side because while the people that were committing the crime were really the minority of the population, they were getting the majority of the publicity.â€

Continuing his trend of getting unprecedented access to his sources, Corwin followed a group of students from Crenshaw High School in Los Angeles for ten months in 1997, chronicling everything from their first day of school to their graduation.

A testament to the bookâ€™s quality and timelessness, Corwinâ€™s book was selected to be a part of the â€œKCC Readsâ€ in 2006, a program which has the entire Kingsborough Community College campus, from English classes to faculty and staff, read the book simultaneously. Corwin was even invited to the school on May 4 to discuss the book in front of a packed audience. Corwin, among all else, considers his trip clear across the country to Kingsborough a way of giving back to students that are in the same situation he was in 20 years ago.

â€œTo me, it was a real honor that people were interested enough in the book to want me to talk about it,â€ said Corwin, who also teaches journalism at USC in Los Angeles. â€œI think that when a writer writes a book, he always wants it to be read. He wants people to be interested in what heâ€™s writing about and the fact that people across the country were interested enough to want to have speak about it was a real honor and privilege.â€

Corwin has also proven his versatility as a writer, taking a step back from non-fiction writing and is currently focusing on a fictional crime novel that he believes will be a combination of the experiences of his last novel, â€œHomicide Special,â€ and his own imagination.

â€œIâ€™m having a really good time making it up and meshing all the experiences I had as a journalist and a non-fiction writer into this novel,â€ said Corwin.

While there is no title or release date available for Corwinâ€™s new novel, if the hard work and dedication that has gotten Corwin this far in his career is any indication, his transition from respected non-fiction writer to famed novelist seems imminent.

This article was originally published in June 2006.