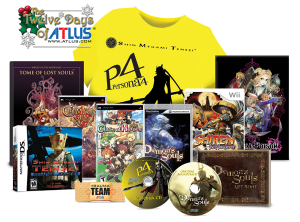 IRVINE, CALIFORNIA — DECEMBER 30, 2009 — Atlus U.S.A., Inc. today announced that they will extend the holiday season and continue to spread holiday cheer after the New Year with the “Twelve Days of Atlus,” a promotion giving members of the Atlus Faithful a chance to win special prizes as thanks for their continued participation and support.

When approached for comment, Atlus spokesbot A.R.A.M. stated, “90% of all internet traffic is dedicated to making things bigger and longer. It was only logical that Atlus would want to do the same and extend the holiday gift-giving season.”

The holiday giveaway will kick off the New Year on January 4, 2010 and last forÂ twelve glorious days, until January 15, 2010. Atlus has made this promotion eligible to all residents of the United States and Canada who have signed up for the Atlus Faithful by January 15, 2010.Â The Atlus Faithful fan mailingÂ list is the best way toÂ get game announcements (sometimes even before the press), news,Â special promotions, exclusive content, and more! Fans are encouraged to sign up for the FaithfulÂ as soon as possibleÂ (LINK) to ensure they are eligible to win.Â Atlus will randomly draw twelveÂ membersÂ from the list of Atlus Faithful who have signed up by January 15, 2010 and winners will be notifiedÂ via email.