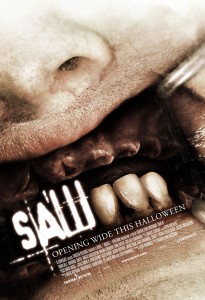 Unless youâ€™ve been living under a rock, deprived from human contact the past decade, you know that the Saw series is without a doubt the biggest horror movie franchise in Hollywood today. Combining thriller and horror movie elements with gruesome depictions of blood and pain, Saw is one of the few horror films left that can scare its viewers and have them clenching their stomachs in disgust at the same time.

Considering this, â€œSaw IIIâ€ continues to give viewers what they want, while shedding light on some back story that was never mentioned in the previous films, making it a solid addition to the franchise and a film that can stand firmly on its own two feet.

Known for playing â€œgamesâ€ with people that donâ€™t appreciate their lives, Jigsaw, played by Tobin Bell [Saw, Saw II] must not only find a way to save his own life, but must try and continue his legacy by teaching Amanda, played by Shawnee Smith [Party Crashers, The Island], the ways of pain and torture that have taken control of his life.

However, Amanda is a far cry away from her mentor Jigsaw and feels that murder is a better way of handling her victims than pain and torture. This creates a much darker and gruesome aura around â€œSaw IIIâ€ when comparing it to the previous films in the series and gives it some stand-alone versatility in the process.

Speaking of versatility in the film, the performances of supporting actors Angus Macfadyen [Braveheart] and Bahar Soomekh [Crash] add a flavor and depth to the film that hasnâ€™t been seen since Cary Elwes and Ken Leungâ€™s performances in the first installment of the film. This ability to take advantage of the sudden twists and turns the series is known for, while maintaining a constant level of good actors on screen, gives â€œSaw IIIâ€ a bit more of an edge when itâ€™s compared to it predecessors.

In the end, thereâ€™s more blood and guts in this film than a vampire could throw a hat at, while the on-screen talent adds to the terrifying and thrilling plot, making â€œSaw IIIâ€ a worthy edition to the series that fans of the previous films will surely enjoy.