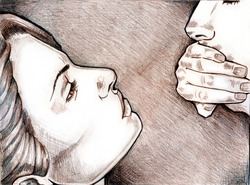 After receiving widespread critical acclaim for DOLOR: Lila | Book I, author Rick Florino will release DOLOR: Chrissy | Book II February 11, marking the second in the series of ten illustrated mystery/horror novellas. A limited number of signed paperback copies of DOLOR: Chrissy will be available for $15 at www.BookOfDolor.com, with digital downloads available for only $5. As an introduction to the series, Florino and his New American Deities production company also continue to offer the DOLOR: Lila download for free at www.BookOfDolor.com. Limited edition signed and numbered physical copies of Lila are also available for purchase.

With DOLOR: Chrissy, Florino–author of DOLOR: Lila | Book I, Do the Devil’s Work for Him, founder of Ruin Magazine and Editor of ARTISTdirect.com–expands his foray into his true passion: fiction writing and the horror genre. The text is exemplified by the bizarre, dark and dreamlike artwork of Kristel Lerman. Says Florino: “Chrissy has one of my favorite scenes in the whole series, because it’s so delightfully sick and twisted. Kristel’s artwork gave those moments a violent vibrancy that’s as undeniable and gorgeous as it is heartbreaking and horrific. She steeped every one of her drawings in blood, and the series shines even more because of it.”

Hereâ€™s a short excerpt from Chrissy:

Rob is having a really bad day.

After getting stood up by a date, he leaves the Dolor Mall during a blizzard. As heâ€™s walking into the storm, a car suddenly sideswipes him out of nowhere, speeding off and leaving him covered in blood. Awakening in the hospital, Rob finds out from Officer Caleb Taylor that heâ€™s in way more trouble than he thought. However, things get really strange once Robâ€™s kidnapped from the hospital by someone too perfect and beautiful to trustâ€¦

“There’s a certain evil that the story explores that’s very prevalent during Lila but much more understated,â€ Florino reveals. â€œThe veil of what really is going on in Dolor begins to slowly lift with Chrissy. At the same time, Chrissy preserves the sardonic humor and social observations that made Lila strangely fun at all the right (and wrong) times. If Lila was about the horror of unrequited love and losing control, Chrissy’s concern is with loving the wrong one and how absolutely terrifying that can be. There’s something hypnotic about the horrific, and I’m just as entranced by it as my readers,â€ he concludes.

Fans can get a glimpse behind the scenes now through a special DOLOR: Chrissy video trailer hosted at http://www.bloody-disgusting.com/news/18663.

Meanwhile, DOLOR: Lila continues to receive accolades from the media. Hereâ€™s a sample of the bookâ€™s critical acclaim thus far:

“Lila makes for a damn good read. It’s creepy in spots, and madly melancholy in plenty of others. Rick Florino clearly understands the sensitivity behind the content, and manages to siphon frightening reality from the idea…outstanding piece of fiction.”
–Matt Molgaard, Fangoria.com, November 16, 2009

“Horror fiction has put a few cities on the map: Castle Rock, Serenity Falls, Orangefield. Add Dolor to that list…Itâ€™s easy to get caught up in Florinoâ€™s tale, not only because it adheres to storytelling brevity, but also because it has a rock â€˜nâ€™ roll sensibility to it, dishing out details of drugs, sex and violence.”
–Rod Lott, Bookgasm.com, November 2009

“If the rest of the volumes are even half as good as Lila, we’re in for a huge treatâ€¦A great start to what appears to be an even greater series…”
–BC, Bloody-Disgusting.com, December 5, 2009

â€œThe style of the book is different and refreshingâ€¦DOLOR: Lila, grabs you and hooks you in, like a Cenobite on Holidayâ€¦youâ€™ll want to finish it first and then sit thereâ€¦in the darkâ€¦waiting for the 2nd bookâ€¦CHRISSY. What this book has done to us is itâ€™s taken us on a ride ala early X-Filesâ€¦where youâ€™re saying to yourself, â€˜I think I know whatâ€™s going on here. Okay, maybe Iâ€™m not sure, but I think I know. I need to know more!â€™â€
–Yvette Kelley, Shallow Graves Magazine, December 16, 2009

â€œLila really just whets the readerâ€™s appetite for the upcoming stories from the mysterious town of Dolor…I am looking forward to the forthcoming nine tales from the denizens, present and past, of Dolor and hope that all ten volumes may one day be published as one volume, much like Stephen Kingâ€™s The Green Mile. Author Rick Florinoâ€¦has the chops to handle the almost Gothic atmosphere of his ambitious ten-part tale.â€
–Elaine Lamkin, DreadCentral.com, January 4, 2010

â€œDOLOR is right up Crypt Magazine’s creepy crawly alley! Mental illness, forces beyond the grave, and downright evil as Hell! What more do you want?â€
–David Necro, Crypt Magazine.com, January 11, 2010

Various musicians have also stepped forward to champion Lila, as evidenced below:

“It’s very refreshing to see a book that leads you one way, then takes you in a different direction. Great imagination, well-written characters, this book has it all. I look forward to the next chapter.” –Corey Taylor (Slipknot, Stone Sour)

“I read Lila when I was on an 11 hour plane ride; I got sucked in really fast cause the words and illustrations were amazing. You know you like a story when you have hate or sympathy for the characters in it. Then I was just mad at Rick Florino cause he hasn’t published the rest of the series and I had nothing to do for the other 10 hours.”
–J-Dog (Hollywood Undead)

“Rick Florino has composed a strong, gripping, epic tale with DOLOR: Lila | Book I that made me want to read the next 9 parts of his DOLOR series right then and there. It’s very reminiscent of Stephen King. For anyone who is a fan of horror films or books or anything horror-related, check the book out!” –Jeff Kendrick (Devildriver)