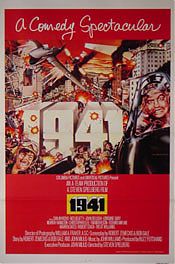 Steven Spielberg’s “1941” is a heartbreaking experience to watch, because the viewer is forced to witness a talented cast squander its potential in a frantic, dizzying, loud and obnoxious mess that is supposedly a comedy.

In 1979, it seemed that Spielberg could do no wrong after the dual smash success of “Jaws” and “Close Encounters of the Third Kind.” Certainly the wunderkind could do no wrong if he teamed up with two of the original cast members of â€œSaturday Night Live,â€ Dan Aykroyd and John Belushi. Not only that, but the supporting cast was peppered with legendary and veteran character actors thrown into the mess of a city concerned with an attack similar to Pearl Harbor.

The premise is ingenious and ripe with potential that is sadly never utilized. Shortly after the attack on Pearl Harbor, the city of Los Angles is worried that the Japanese will decide to strike an important inland city. Dozens of characters and stories are interwoven as the city becomes engulfed with panic.

An interesting problem with the film is that while some moments are very funny and the technical achievements groundbreaking (it was nominated for three Academy Awards for its special effects), the movie is centered around unrealistic characters. Without solid characters to grasp the audience’s attention, the film is just hollow. When all is said and done, you will have a splitting headache. Screaming characters, explosions and a runaway Ferris wheel are all awe-inspiring spectacles to witness, but it is all meaningless without charismatic characters.

Belushi heads the mess with his odd performance as Capt. Wild Bill Kelso. Picture, if you will, Bluto from “Animal House” as a lost World War II pilot. He lands in Los Angeles, but is unaware that he is no longer on enemy territory. If this character were explored further, it could have been a much better movie.

Oddly enough, Aykroyd and Belushi don’t share that many scenes, but Aykroyd is one of the best parts of the movie. Playing Sgt. Frank Tree enables Aykroyd to steal every scene he is in. His character turns up for several pivotal scenes that include leaving a cannon at a civilian’s (Ned Beatty) home, and an hysterical scene where he rides a tank through the city.

Tim Matheson seems to be channeling his “Animal House” performance in his role as the skirt chasing Capt. Loomis Birkhead. He is chasing after a woman (Nancy Allen) that is only sexually attracted to men while in an airplane. Matheson is often dependable in these roles, and seems natural in front of the camera.

But the best casting is demonstrated by the supporting actors. ToshirÃ´ Mifune and Christopher Lee are the German and Japanese heads of a submarine looking to stage an attack on Hollywood. Treat Williams is an angry soldier that hates eggs, and crosses paths with Robert Stack and Warren Oates.

The film also created an amazing set that captures the bygone era of the early â€™40s, but the audience is forced to watch that beautiful set being destroyed over the duration of the picture.

The script was penned by “Back to the Future” writers Robert Zemeckis and Bob Gale, who have been great with character-driven tales that house amazing special effects. Their career began with small but poignant comedies such as “Used Cars” and “I Wanna Hold Your Hand.” It is safe to say that the original concept may have gotten lost in this mess, which went through so many script changes and additions when filming began. None of the characters seem to have that witty sense of dialogue that made these two writers so famous.

A director’s cut was issued on laserdisc, VHS and a DVD that runs about 30 minutes longer, and enhances some of the lesser characters but slows down the pacing. If you have the patience to sit through another half-hour of the already two-hour disaster, then it is highly recommended you see the director’s cut.

A few shining moments are not enough to spare the viewer the headache and heartache of sitting through “1941.” Even Spielberg has recognized this as the lowest point in his career, and he directed the remake of “War of the Worlds.”