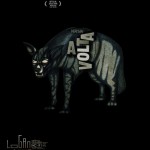 Review Fix EIC Patrick Hickey Jr. shares his thoughts on the short animated feature, “Nasa A Volta,” which is appearing at the Sundance Film Festival.