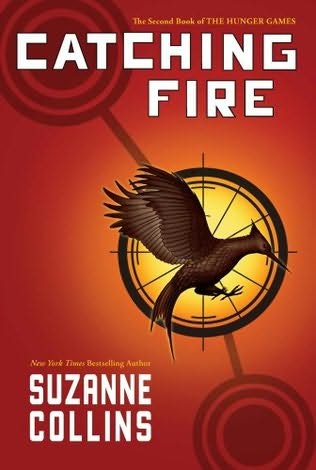 Thought the Games Were Over? Think Again.

â€œCatching Fireâ€ is the bestselling sequel to Suzzane Collinsâ€™ â€œHunger Games.â€ It is an ironic title, since it provokes chills with its futuristic storyline. The book continues naturally where â€œHunger Gamesâ€ left off, but contains more eye-opening suspense and answers dozens of questions left over from â€œHunger Gamesâ€ about the Capital, and the fate of the main characters.

The reader will follow the past Hunger Game Victors on their Victory Tour across each District. This is not your average celebrity meet and great. The intolerable Capital and President Snow use this opportunity to flaunt the murderers of each Districtâ€™s kids in the mourning familiesâ€™ faces. No Victor wants to do this. It is a shameful act, yet mandated by the authorities. Nothing appears as it seems on the tour. Sparks will fly. Whether intentional or not, the Capital has even more reason to be out for blood. Forget the fact that kids were brutally murdered live on television â€” thatâ€™s nothing. Collins found a way to make the governmentâ€™s actions look much worse, and fuel the fight of a lifetime for those who remain.

Collins plucks at the heartstrings with a more evident love triangle regarding three of our heroes. As it was in the previous novel, the stakes become much higher to prove loyalty among friends, defy foes and fight to protect those the protagonist loves. However, the sci-fi novel does not disappoint with its action-packed scenes. There are more gruesome tortures and more deadly turns .

The characters who remain from the previous novel will continue their fight for survival, and destinies will be revealed. Its definitely a fit for the fantasy/sci-fi genre; it comes packed with a quest, good versus evil battles (to the death, at times) and even a twist or two.

Collins seems to get better with the cliffhanging chapters in this book, which makes for great reading. This book will not leave your sight. She has quite a knack for hooking the reader, proving she can be placed into the powerhouse-author category with the likes of J.K. Rowling. One great example is right at the end of Chapter 3. There is a spine-chilling line, which will make you hate the Capital even more this time around.

Colllins will also embrace symbolism and force the reader to come to terms with the power of a mere symbol â€“ the Mockingjay. This post-apocalyptic bird will seem like something so small, yet will ignites a fired passion and even revolt among the repressed.

By the end of this one, Collins has the reader begging for more. Collins will leave you yearning, but do not fret; the third installment at this point is said to be in the works, and should come out this summer. Stay tuned.